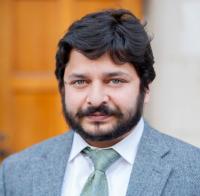 Pushkar Sohoni is an Assistant Professor in the Department of Humanities and Social Sciences at the Indian Institute of Science Education and Research (IISER), Pune. Prior to joining IISER, he was South Asia Bibliographer at the Van Pelt Library, University of Pennsylvania, where he received his doctorate in the History of Art in 2010 for his research on architecture of the early modern Deccan.

While in Philadelphia, Pushkar worked with the Philadelphia Museum of Art and the Architectural Archives of the University of Pennsylvania, and taught at the University of the Arts. He has also been a member of several interdisciplinary research collaborations, such as “Art Space and Mobility in the Early Ages of Globalization 400-1650,” sponsored by the Kunsthistorisches Institut in Florence.

Pushkar has knowledge of South Asian languages including Hindi, Marathi, Urdu, and Persian as well as basic comprehension of Konkani, Gujarati and Bengali. He has traveled widely across India, and has established contacts with publishers, libraries, and archives in the region. He is a life member of the Bhandarkar Oriental Research Institute in Pune and the Council of Architecture, and also belongs to several other professional organizations, such as the Association of Asian Studies and the College Art Association.

Having trained as a professional architect in India, Pushkar worked on several conservation projects in India and abroad after receiving a graduate degree in Historic Preservation. Contemporary architecture and its practice in South Asia are some of his fields of study, including the politics and structures of preserving historic sites. His broader interests include:  archaeology, collecting practices, history, and numismatics.