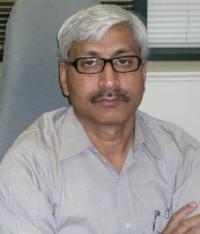 Apoorvanand Jha is a professor of Hindi at the University of Delhi. He was born and raised in Siwan, Bihar and received his undergraduate education from Bihar University. He earned his Masters and Ph.D. from Patna University and has worked on the development of Marxist Aesthetics in Hindi Literature.

Dr. Jha started his teaching career at T.P.S. College, Patna, a constituent unit of Magadh University. In 1999, he was invited to join Mahatma Gandhi International Hindi University, a Central University set up by the Government of India, and was instrumental in developing the University’s vision plan and first academic programs. In 2004, Dr. Jha joined the Hindi Department at the University of Delhi where he was instrumental in redesigning the department’s academic program.

Dr. Jha was part of the core group that designed the National Curriculum Framework for School Education in 2005 and was a member of the national Focus Group on Teaching of Indian Languages formed by the National Council for Educational Research and Training (NCERT). He has worked with the Committee to Advise on Renovation and Rejuvenation of Higher Education in India under the Chairmanship of Professor Yash Pal. Created by the Government of India in 2008, the committee worked to craft a new vision plan for the sector of higher education in India.

Additionally, Dr. Jha has published two books of essays in literary criticism: SUNDAR KA SWAPNA and SAHITYA KA EKANT. His critical essays have appeared in all major Hindi journals. Apart from his academic and literary writings, he also contributes columns in Indian Newspapers and magazines on the issues of education, culture, communalism, violence and human rights.

We are pleased that Dr. Jha will be in residence at Penn as a Visiting Scholar at the Center for the Advanced Study of India from May through June 2010.