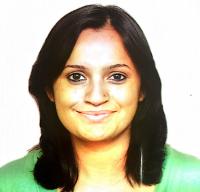 Anuradha Thakur is an officer of the Indian Administrative Service from the Himachal Pradesh cadre. She has served for twenty years in government covering the range of working at the grassroots level as Block Development Officer to more senior positions in field units, including Collector and District Magistrate, heading different departments at the State government level, at the Central government level in the Department of Economic Affairs, Ministry of Finance, and at the World Bank as Advisor to the Executive Director representing  India, Bangladesh, Bhutan, and Sri Lanka.

Her interest in urban governance and development led to a study of the London Mayor's office in 2003 during her sabbatical with the London School of Economics as part of the Chevening scholarship program. She continued to work on different aspects of urban development with different state governments as Director in the Ministry of Finance. Her work at CASI focuses on the importance of city regions and metropolitan governance in India and how attention needs to shift to these if the economic potential of urban areas is to be realized.