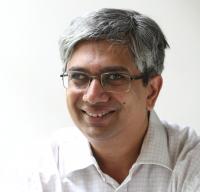 M. R. Madhavan is the President and co-founder of PRS Legislative Research in New Delhi. His work focuses on improving the effectiveness of legislatures as the key decision making bodies in a democracy. The work is based on three dimensions: to increase the use of data and analysis in the process of decision making by legislators; to make information about legislatures and legislators accessible to citizens; and to catalyze greater engagement between citizen groups and legislatures. The objective is to make the legislative process better informed, more transparent and participatory.

Madhavan is a frequent columnist on issues related to legislative issues and representation, and has contributed several book chapters on these topics. Prior to starting PRS in 2005, he worked with ICICI Securities and Bank of America in Mumbai and Singapore as an analyst covering equity, interest rate, and currency markets. Madhavan holds a B.Tech from IT Madras and MBA and doctoral degrees from IIM Calcutta. He has been recognized as a distinguished alumnus by IIT Madras and IIM Calcutta.