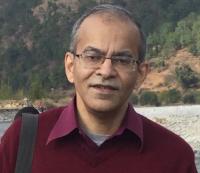 Swagato Ganguly is the Editorial Page Editor of The Times of India (2009-21) and was a CASI Spring 2022 Visiting Fellow. He obtained his Ph.D. in Comparative Literature and Literary Theory from the University of Pennsylvania in 1998, and has worked since then on editorial pages of Indian newspapers, commenting on national politics and international affairs. He is currently a Research Affiliate, Lakshmi Mittal South Asia Institute, Harvard University; Adjunct Fellow, Gateway House; and Consulting Editor of The Times of India. His contemporary research interests lie in strategic affairs, geopolitics of the Indo-Pacific region, Indian foreign policy in a complex, transforming world, and history of liberal thought in India. His two most recent books are: (as author) Idolatry and the Colonial Idea of India: Visions of Horror, Allegories of Enlightenment, Routledge 2018; (as anthology editor) Destined to Fight?: India and Pakistan 1990-2017, Times Group Books 2017. His research while at CASI focused on the geopolitical triangle between India, China, and the United States in the Indo-Pacific region.