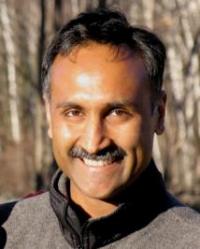 Dr. Vivek Bhandari is the Director and Professor of Social Science at the Institute of Rural Management, Anand (IRMA) in India, is an alumnus of St. Stephen’s College, Delhi, and the University of Pennsylvania.  After earning his doctorate from Penn in 1998, he became a faculty member in the School of Social Sciences at Hampshire College in Amherst, MA. In this capacity, Dr. Bhandari also taught and researched collaboratively at academic institutions in the Five College Consortium located in Massachusetts.   He has been in his present role since 2007, when he moved to India after fifteen years in the US.

Dr. Bhandari's writings in the fields of comparative history, international political economy, historical sociology, cultural studies and peace studies have appeared in journals such as the Journal of Asian Studies, Comparative Studies of South Asia,and Africa and the Middle East, in edited volumes, and reference works such as theInternational Encyclopedia for the Social Sciences and the Encyclopedia of Modern Asia. He has also participated in conferences at numerous American and Indian academic institutions.  In his capacity as a public intellectual, he has provided on-air commentary on NPR, as well as Indian media.  Most recently, as a co-author of "The State of Panchayats Report: An Independent Assessment, 2007-08,” India’s first macro-study of institutions of local self-governance in India, Dr. Bhandari has taken a particular interest in the study of social and community mobilizations in India, and exploring strategies for mediation between the state, and extremist movements.

Dr. Bhandari serves on the boards of numerous professional and academic institutions, as well as committees convened by the Indian government on matters pertaining to rural development. His work as a professor and the director of IRMA involves an in-depth engagement with the changing character of rural India, and the role that academic and civil society organizations can play in shaping the country’s fast-unraveling rural transformation.  In 2008, Business Today magazine included him in its list of “India’s Top-25 Young Executives under the age of 40.”

We are pleased that Dr. Bhandari will be in residence at Penn as a Visiting Scholar at the Center for the Advanced Study of India from September through November 2010.