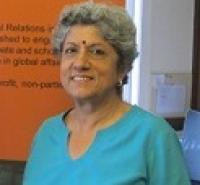 A distinguished diplomat, Neelam Deo has been the Indian Ambassador to Denmark and Ivory Coast with concurrent accreditation to several West African countries. She has also served in Indian embassies in Bangkok—at a time when the ASEAN was evolving and the Cambodia question was being discussed in Paris, in Rome while the Red Brigade was still active and the European Union was nascent, and in Washington D.C. It was here that she took on her most challenging mission and liaised with the U.S. Congress on strategic issues, and took the opportunity to speak on India’s position in her interactions with various think tanks and universities. Ambassador Deo’s last assignment was as Consul General in New York from 2005 to 2008. During the course of her assignments in the Ministry of External Affairs, she was Joint Secretary for Bangladesh, Sri Lanka, Myanmar and the Maldives. At different times over the course of her career, Ambassador Deo has been on the desk for Bhutan, South East Asia and the Pacific—during an era of growing anti-Indian sentiment in Fiji. She has also worked on the Middle East and North Africa desk—most significantly during the 1980-1988 Iran-Iraq war—and retains an active interest in the region. She has a Master’s degree from the Delhi School of Economics and is currently on the board of Breakthrough (a human rights organisation), Oxfam India and Mahindra CIE Automotive Limited. Apart from her articles and commentaries written exclusively for Gateway House, Ambassador Deo writes for several mainstream publications, and is an occasional commentator for mainstream television news channels. Her areas of expertise are Africa, foreign policy, India's Bilateral Relations, and the U.S.