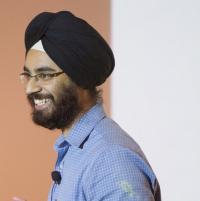 Prakarsh Singh is an Assistant Professor of Economics at Amherst College, Massachusetts. He earned his Ph.D. in Economics from the London School of Economics in 2011, where he also earned an MRes. and a BSc. in Economics. His main area of research is the impact of performance pay to caregivers on child malnutrition in India. He has carried out four field experiments in India in association with state governments in India, targeting child malnutrition in Chandigarh (twice), West Bengal, and Punjab. His focus is on testing the impact of performance-based incentives for public health workers and personnel economics of the state. He has received research grants from the Bill & Melinda Gates Foundation, DFID, UNU-WIDER, Fordham University, and several state governments in India (Punjab, West Bengal, Chandigarh, Tamil Nadu, Rajasthan). He has published in The Journal of Economic Behavior & Organization, The Journal of Conflict Resolution, BE Journal of Economic Analysis & Policy, The Economics of Education Review, The Journal of Development Studies, Journal of African Economies, Defence and Peace Economics, The Economics of Peace and Security Journal, and The Journal of Economic Education. He was the main organizer of the inaugural Liberal Arts Colleges Development Economics Conference held at Amherst College in October 2013. He is a Research Affiliate at IZA, a Visiting Fellow at Navarra Center for International Development, Spain, and was a Visiting Scholar at the University of Pennsylvania and a Visiting Professor at Swarthmore College during 2014-15.