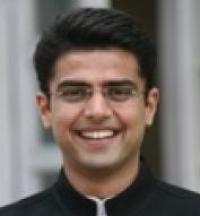 Sachin Pilot is President of the Rajasthan Pradesh Congress Committee. In 2004, he became the youngest MP elected to the 14th Lok Sabha from the Dausa Parliamentary Constituency of Rajasthan. He has served as a Member of the Parliament’s Standing Committee on Home Affairs, Consultative Committee in the Ministry of Civil Aviation, and Budget Estimates Committee of Parliament. In May 2009, he was re-elected to the Lok Sabha from the Ajmer Parliamentary Constituency of Rajasthan and became Minister of State (MoS) in the Ministry of Communication & Information Technology. In 2012, he became Minister of the State (Independent charge) of Ministry of Corporate Affairs.

Mr. Pilot was selected as one of the Young Global Leaders by the World Economic Forum in 2008.  While serving as a Minister in the cabinet, he became a commissioned officer in the rank of Lieutenant in the Territorial Army, the first ever and the only minister to do so. Mr. Pilot earned a B.A. in English Literature from St. Stephen’s College (University of Delhi) and an M.B.A. from Penn’s Wharton Business School.