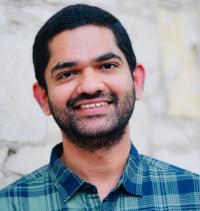 His research interests lie in Modern South Asian history, global, legal, intellectual history, and postcolonial studies. His Ph.D. dissertation, Federal Futures: Imagining Federation, Constitution, and World in Late Colonial India, studies the rise of federalist ideas in interwar India and their growing influence among various groups—nationalists, princes, liberals, and minorities—in the late 1920s through the 1940s. It presents an alternate genealogy of political thought, constitutionalism, and worldmaking in late colonial India by showing the deep fissures between those who wanted a unitary state (singular sovereignty) based on the British colonial state and those who wanted a federation (shared sovereignty) based on Euro-American constitutionalism. He draws on multi-lingual archives—marshaled through 18 months of archival research in three continents—to recover the underappreciated federalist imaginaries in late colonial South Asia.

He was a Fellow at the Hurst Institute in Legal History at the University of Wisconsin Law School in 2021. His research has been supported by numerous centers within UChicago, Humboldt-Yale History Network, American Historical Association, and the Library of Congress. He is interested in ombudsing and served as the Student Ombuds at the University of Chicago. His writings have appeared in peer-reviewed and public forums such as Law and History Review, Archives and Records, Los Angeles Review of Books, Economic and Political Weekly, Scroll.in, The Diplomat, Hindustan Times, and The Indian Express.