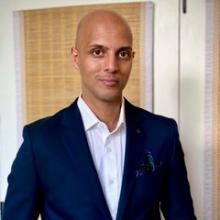 Steven J. Fluharty, Dean and Thomas S. Gates, Jr. Professor of Psychology, Pharmacology, and Neuroscience, has announced that Tariq Thachil has been named Director of the Center for the Advanced Study of India (CASI) and Associate Professor of Political Science. As Director of CASI, he will also hold the Madan Lal Sobti Chair for the Study of Contemporary India. The appointment is effective July 1, 2020.

Thachil comes to Penn from Vanderbilt University, where he is an associate professor of political science. He studies political parties and political behavior, social movements, ethnic politics, and urban migration, with a regional focus on South Asia. His current research examines the political consequences of rapid urbanization and internal migration in India.

Thachil’s first book, Elite Parties, Poor Voters: How Social Services Win Votes in India, was published in 2014 and received several awards, including the Gregory Luebbert Book Award for best book in comparative politics from the American Political Science Organization. His articles have appeared in the American Journal of Political Science, Contemporary South Asia, Journal of Politics, and World Politics, among others. He has also written for media outlets including the Indian Express and the Washington Post. In 2019, he received the Heinz I. Eulau Award for Best Article in the American Political Science Review. Thachil holds a Ph.D. in government from Cornell and a B.A. in economics from Stanford.

Since its founding in 1992, CASI has advanced understanding of contemporary India by engaging in policy-relevant research focused on present-day challenges; serving as a forum for seminars, workshops, and conferences; producing scholarly publications; and providing undergraduate and graduate students with unparalleled internship and research opportunities in India.

“CASI was the first research institution in the U.S. dedicated exclusively to the study of contemporary India, and it is an expression of our commitment to scholarship on India and South Asia,” says Fluharty. “It is a vital part of our drive to not only expand global understanding, but to discover global solutions to issues like sustainability, poverty, and justice. Tariq Thachil will be an outstanding partner in this mission.”

“I am extremely pleased Professor Tariq Thachil has agreed to be CASI’s next director,” says Marshall M. Bouton, G’68, Acting Director and Visiting Scholar at CASI, and former Chairman and current member of its International Advisory Board. “He will bring to the task not only the depth of his superb scholarship on contemporary Indian politics and society, but also a personal and professional commitment to greater understanding of India and its many challenges.”

The Madan Lal Sobti Chair for the Study of Contemporary India was established through the generosity of numerous alumni, parents, and friends of the University, including P.C. Chatterjee; Raman Kapur, PAR’07; Sreedhar Menon; Sunil Mittal; Dalip Pathak, WG’78, PAR’10; Rajiv Sobti, GR’84, PAR’08, PAR’12; and Sanjiv Sobti, WG’85, GR’86, PAR’10, PAR’20. The chair is named in honor of the Sobtis’ late father, Madan Lal Sobti, and supports in perpetuity a professorship held by the Director of CASI.