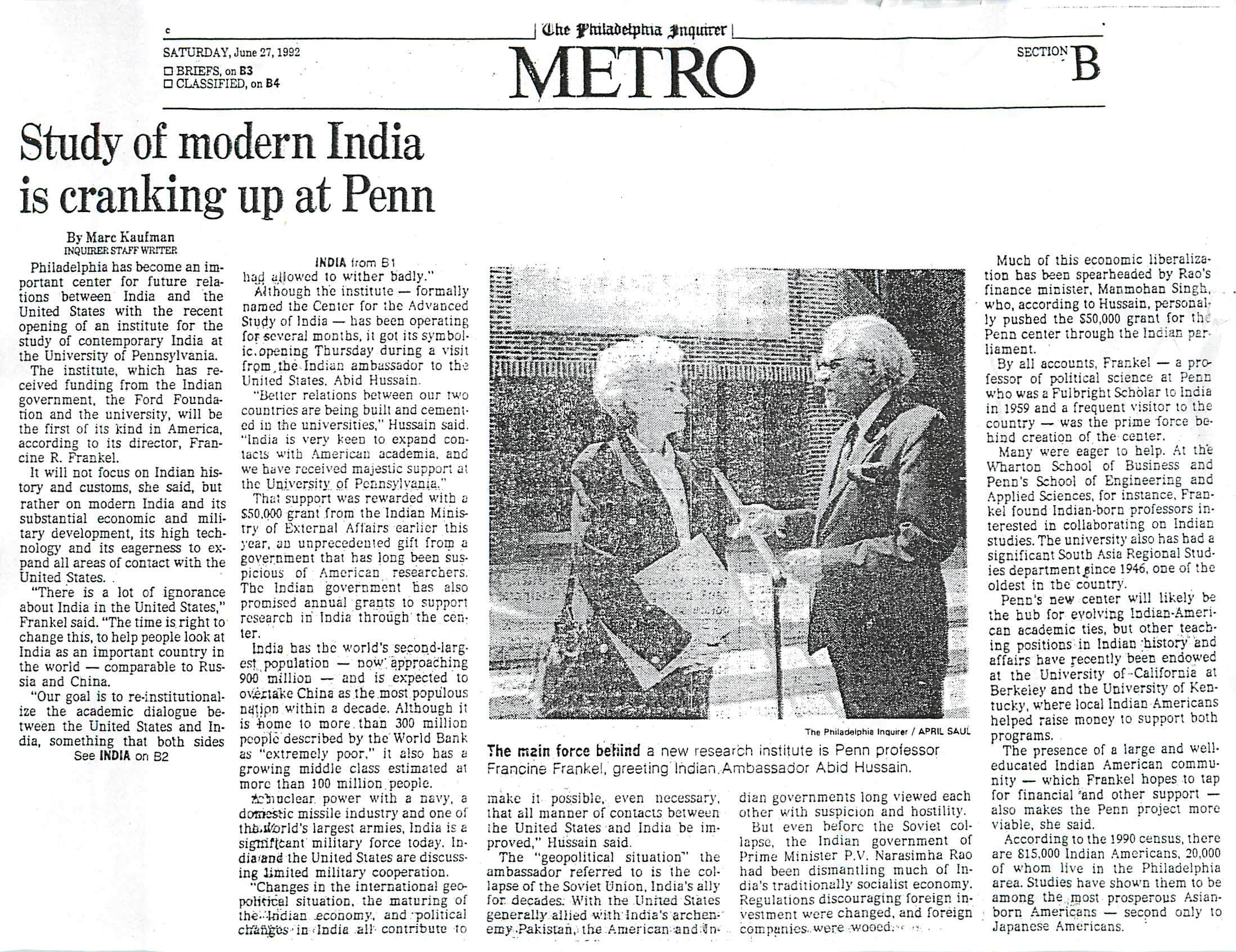 From the time in 1959 when I first went to India on a student Fulbright fellowship, I realized that it was unique as a civilization, social order and polity and needed to be understood holistically. As a political scientist, this was very difficult to do because of the break between the Sanskritists studying the ancient culture and social science scholars of modern India. Academically, India was placed in the context of South Asia, an artificial post-colonial construct and a bad fit. This was distorted further by the American Cold War perspective that equated non-aligned India and allied Pakistan, ignoring the reality that India had emerged as the dominant power in South Asia, as well as a rival to China in Asia. The Cold War perspective only began to change with the Clinton Administration’s efforts to de-link India and Pakistan. Converging U.S.-India security interests in the 2000s made it essential to understand a rising India in its own terms. Penn is the best university to do this as it builds on strength in both South Asia Studies and on CASI.

The Center for the Advanced Study of India (CASI) was founded in 1992 by Prof. Francine R. Frankel from Penn’s Department of Political Science, as the first academic research center in the United States for the study of contemporary India. Building on Penn’s longstanding commitment to and unmatched resources in South Asia Studies, CASI is a unique research institution of international excellence, linking American and Indian academics, policymakers, civil society representatives and business leaders, with a mission to nurture a new generation of young scholars of contemporary India. Tariq Thachil, the current Director, was appointed to this role in 2020.

CASI was established in a context of complex and wide-ranging transitions. With the end of the Cold War, both India and the United States recognized new potential for cooperation: economic, technological, and political. CASI’s focus on India represented the new realities of the international environment in which Asia would play a significantly greater role in global issues affecting the U.S. CASI’s founding, only a year after India launched its historic economic reforms, also coincided with a moment of extraordinary internal dynamism and flux within India, and a period of unprecedented transformation in the country’s economic, political and social landscape. These transitions and rapidly evolving contexts, shaped by intensifying globalization and interdependence, demanded new intellectual approaches and a reassessment of the role of area studies in international programs, a challenge which CASI both anticipated and was uniquely positioned to address through collaborations with Indian institutions and within the U.S.

On Thursday, October 12, 2017, CASI commemorates its 25th anniversary with a symposium titled A Quarter Century of India's Transformations (made possible through the generous support of the CASI International Advisory Board and The Nand & Jeet Khemka Foundation).The event will be held at the Michael A. Fitts Auditorium, Golkin Hall, University of Pennsylvania Law School, 3501 Sansom Street, Philadelphia, PA 19104.

In 2012, CASI celebrated its 20th anniversary and commemorated the event with a symposium titled India: Two Decades of Transformation.

“We must remember that the students now passing through our educational machinery will live their effective lives during the second half of the twentieth century, and it takes no gift of prophesy to predict that at that time the world will include a vigorous India, possibly politically free, conceivably a dominant power in the Orient, and certainly intellectually vital and productive. How can Americans who have never met India in their educational experience be expected to live intelligently in such a world? Are we to wait until some cataclysm brought about in large part by our own ignorance and misunderstanding forces India on our attention? Or are we to plan our intellectual life so as to foresee the needs of the future?”

-W. Norman Brown, Founder of the first department of South Asian Studies in the U.S. at Penn, “India and Humanistic Studies in America” in American Council of Learned Societies Bulletin, 1939