"What is Keeping Indian Women Out of the Workforce?" Kanika Mahajan. Scroll.in, August 22, 2022

Women and Work in India 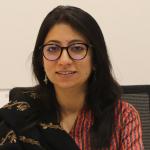 Despite rapid economic growth, declining fertility, and an increase in education of women in India over the past three decades, the female workforce participation (FWFP) rate (proportion of women who are working) in the country continues to remain low. In fact, it has shown a precipitous and persistent decline since 1987. Figure 1 plots the workforce participation rates for women and men aged 25-60 in India’s rural (Panel A) and urban (Panel B) regions from 1987-2017. This age group is chosen since educational attainment is largely completed by 25 years of age for almost all individuals, thus, ruling out any direct effects of an increase in enrollment in higher education on the work for participation (WFP) rates. Notably, the levels and patterns differ between the two panels. In both rural and urban India, the male WFP is much higher than that of females. Male employment rates in this age group have declined slightly from 96 percent to 94 percent in rural and from 94 percent to 91 percent in urban India. The FWFP in urban India has also fallen marginally from 26 percent to 24 percent. However, the most significant decline in the female employment rate comes from rural India, where the female WFP has fallen from 54 percent in 1987 to 31 percent in 2017. 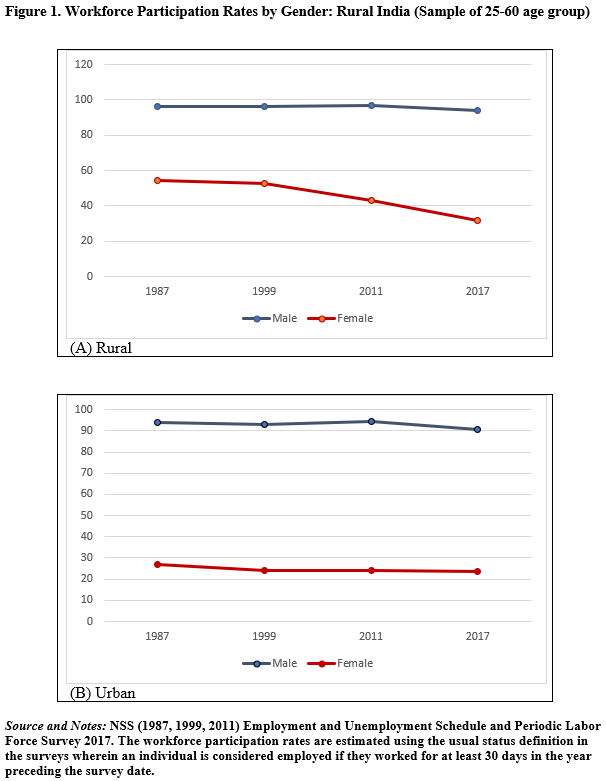 Supply-Side Factors Explaining the Decline
Existing research shows that even within the group of rural women aged 25-60, the fall has occurred mainly among those currently married (almost 90 percent of all women). Supply-side factors like changing demographic characteristics (increasing education qualifications of married women and men in their household) and rising household income explain the entire decline in FWFP from 1987-99. However, these account for 14 percent to at most half of the fall from 1999–2011. A U-shaped relationship between female education and female employment and a negative relationship between education or income of male household members and female employment drives this decline. 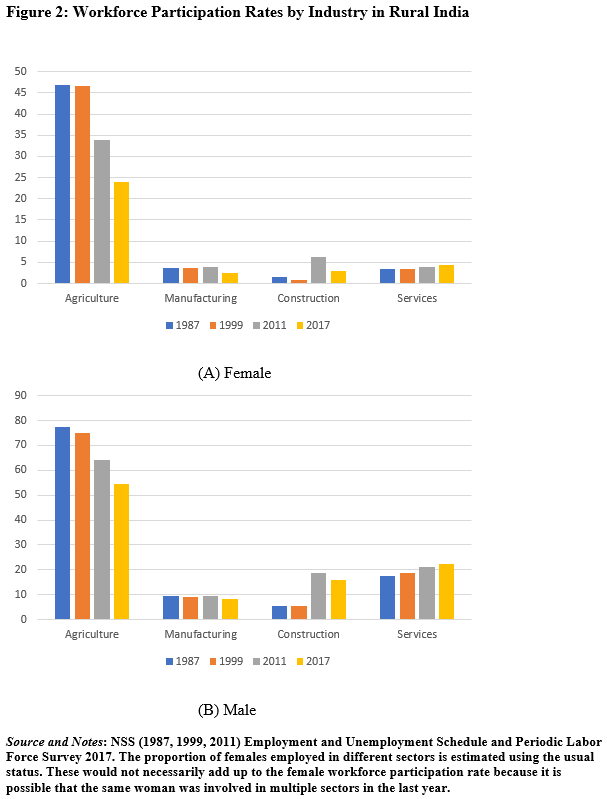 Demand Side Factors Explaining the Decline
Given that the decline in FWFP between 1999-2011 remains unexplained by supply-side factors and that the fall occurred in agriculture, demand-side factors in the agriculture sector may have contributed. There is a gendered division of labor in Indian agricultural operations. Female labor is less likely to be used in operations that require physical strength (tilling) and more likely to be utilized in tasks that require precision (sowing, transplanting, and weeding). This results in limited substitutability between men and women in agriculture. When male and female labor are imperfect substitutes, technological change can have disproportionate gender impacts, such as the threefold rise in agricultural mechanization (primarily in tilling land) from 1999-2011. For instance, while male labor can be directly substituted in tilling, female labor can be substituted in weeding due to mechanized tilling, leading to restricted weed growth. In a recent paper, my co-authors and I show that mechanization led to a significantly greater decline in women’s than men’s labor on Indian farms from 1999–2011. We accomplished this by comparing changes in labor force participation of men and women in regions more suited to mechanization to those less so. To ensure that our results are not biased due to unobserved factors driving mechanization, we use exogenous variation in the extent of loamy soil, which is more amenable to deep tillage than clayey soil and therefore more likely to see the adoption of tractor-driven equipment for primary tilling. In terms of magnitude, a 10 percent increase in mechanized tilling led to a 5 percent fall in women’s farm labor use, with no accompanying increase in their non-farm employment. Given an increase in mechanization by 32 percent from 1999-2011, the estimates show that almost the entire decline in female labor use in agriculture during this period can be explained by a rise in mechanization, with other factors remaining constant. We find that this decline is driven by reduced demand for labor in weeding, a task often undertaken by women. 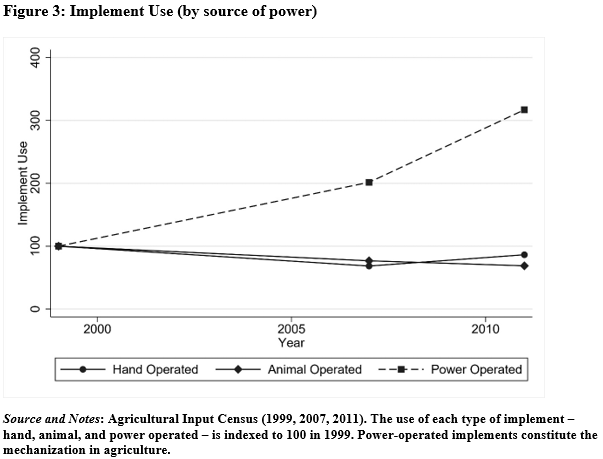 Women Missing Structural Transformation
The aggregate and sectoral trends in WFP, along with a greater decline of WFP for women in agriculture, point to a worrying future for India—women are missing out on structural transformation. While men who exited agriculture have found jobs in other sectors (particularly construction and services) women haven’t. Evidence from National Sample Surveys shows that lack of access to jobs near one’s home is one of the significant hurdles women face in gaining access to remunerative employment outside agriculture. Lower female mobility restricts women’s access to non-farm jobs in construction and low-skilled services since these jobs are usually located at a great distance from the village.

Employment data from International Crops Research Institute for the Semi-Arid Tropics (ICRISAT) surveys show that 32 percent of males work outside the village, but only 5 percent of women in the workforce do so. At the same time, less-than-graduate education restricts their access to higher skilled service sector jobs. Lower female mobility constricts their access to non-farm jobs, limiting the extent to which female workers can cope with adverse income shocks like droughts. Our research shows that women’s workdays are 19 percent lower than men’s when a drought occurs, driven by the former’s lack of diversification to the non-farm sector.

The Urban Context
Although there has been only a marginal decline in FWFP in urban India, the overall participation of urban women in the labor market remains conspicuously low at 24 percent vs. 90 percent for men. Research shows that a combination of supply and demand factors explains this low level. Some of the factors that substantiate the low levels of urban women in the labor market include social norms around the gendered division of domestic work, concerns regarding family status if a woman is working, a higher increase in home productivity of women vis-à-vis their market productivity with an increase in their education levels, and a lack of job opportunities near their homes. In addition, employed women in India face a penalty in the marriage market. Recent research shows that employed women are 14-20 percent less likely to receive proposals from potential suitors in India. Such a penalty is especially prevalent among the higher castes of northern India, where gender norms are more patriarchal.

How can a country of 1.5 billion people fully realize its economic and social potential if 40 percent of its working-age population do not engage in productive jobs? While the low levels are often attributed to social norms around the gendered division of domestic work and status concerns, the declining involvement of women in agriculture with little diversification to other non-farm sectors points to a lack of mobility and skills. The limited mobility of women itself can stem from norms around household domestic responsibilities (in which women spend at least 7 hours of work per day as opposed to men, who spend only 30 minutes per day). Changing social norms is a slow process, but other barriers like providing safe and accessible transport for women could perhaps induce some women to enter the labor market. Another avenue to improve female employment rates in India could be providing women with skills that align with the demand in the labor market. As it stands, the low and further declining female employment rates in India not only reduce female agency and bargaining power within the household, but are also detrimental to the country’s income and social growth.

Kanika Mahajan is an Assistant Professor at Ashoka University, India. The research discussed in this article is co-authored with Farzana Afridi, Monisankar Bishnu, Diva Dhar, Taryn Dinkelman, and Nikita Sangwan.

This article is the second in a series of guest-edited IiT short series. The articles in this series seek to understand India's economic future and its prospects for structural transformation. The first article takes stock of the health of India's sovereign debt and gives an overview of the consequences and possibilities in the immediate future. The next three articles focus on three major national endowments that have been neglected in the course of our development trajectory. This article focuses on labor force participation of women, the third on water, and the fourth on land. The ability of the sovereign to spend on nation building, along with how we use our endowments, will be key in determining our future.
(Guest Editor: Shoumitro Chatterjee, Assistant Professor of International Economics, SAIS, JHU)