How Clean is My Metro? 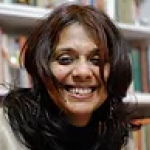 The commencement of the first metro line in 2008 has left Bangalore in a state of flux, with a process that never seems to end. With every line added, places and landmarks disappear leaving rubble, remains of dismembered trees, and fractured spaces in its wake. The protests never cease but neither does the metro. It slides across the city blind to the textures, colors, and the living city it passes. From inside its glassy tube, one can only see out and beyond.

Ashok, a young man from a small town, is a train operator on the Purple Line. “I felt like a bird flying above the city, looking into all those hi-fi places...it was the most thrilling thing,” he said, recalling his first ride over Bangalore’s high street: MG Road. From the train, the city appears to spread out in quiet order as you sail above the din of traffic, dust, and grime. The commuter’s visual field stretches to the smoke-smudged horizon rimmed with circles of high-rises that expand with every passing day. Women say they prefer the metro despite its poor last mile connectivity as they believe it is “clean,” “safe” and used by “decent people”—a term that most often means well-turned out, orderly, and middle class. 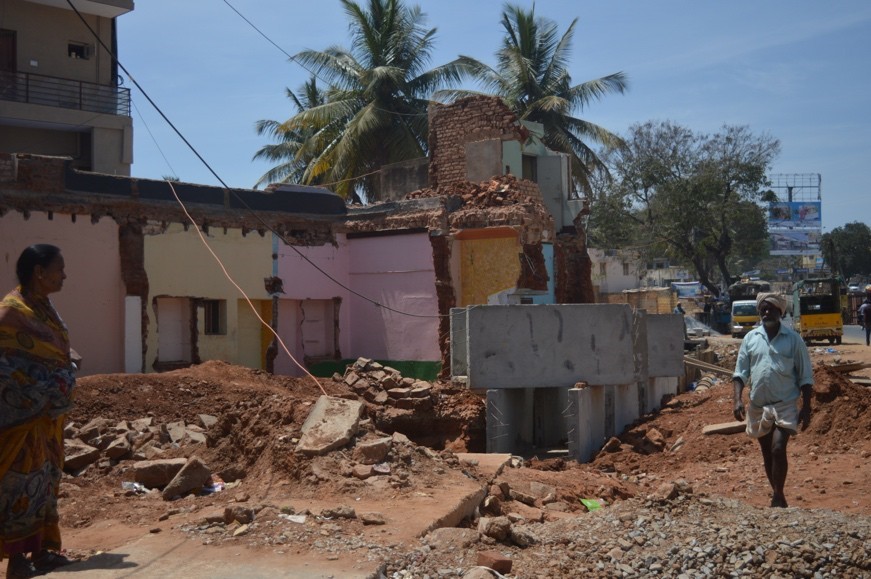 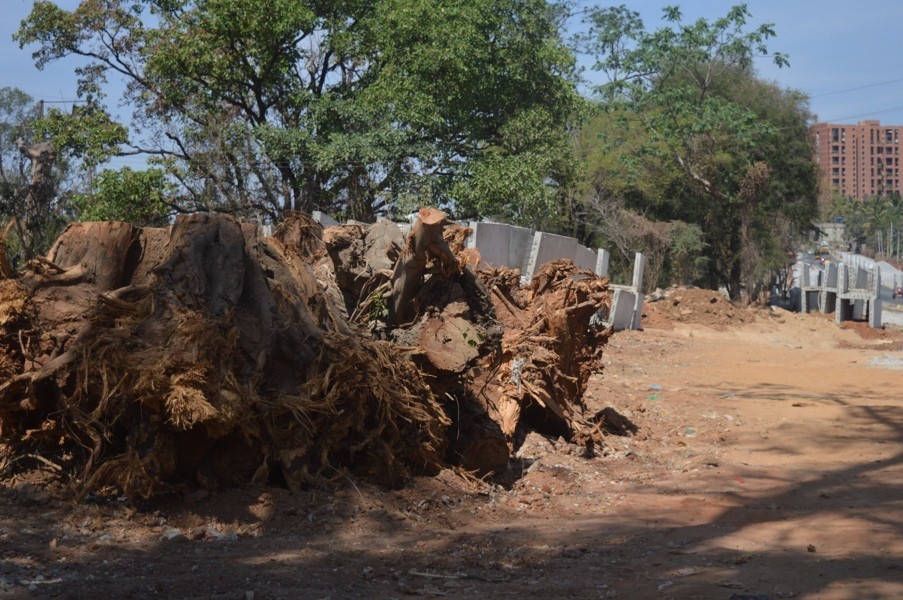 For all its efficiency and aura of a high-tech dream machine that has liberated thousands of people from the drudgery of a city commute, the metro is riddled with contradictions. These occasionally bubble to the surface in the form of a flash strike by employees or a technical glitch, like the infamous “honeycomb”—a deformation caused by faulty construction that shut down a section of the busy Purple Line. Its seamless movement rests on unresolved battles that environmentalists, land losers, and other city residents have waged on the streets and in courts since 2007. Much of this conflict, however, has not significantly impacted the train, as it runs on unfettered, making new pathways across the city, adding pastures from the hinterland into every growing city. 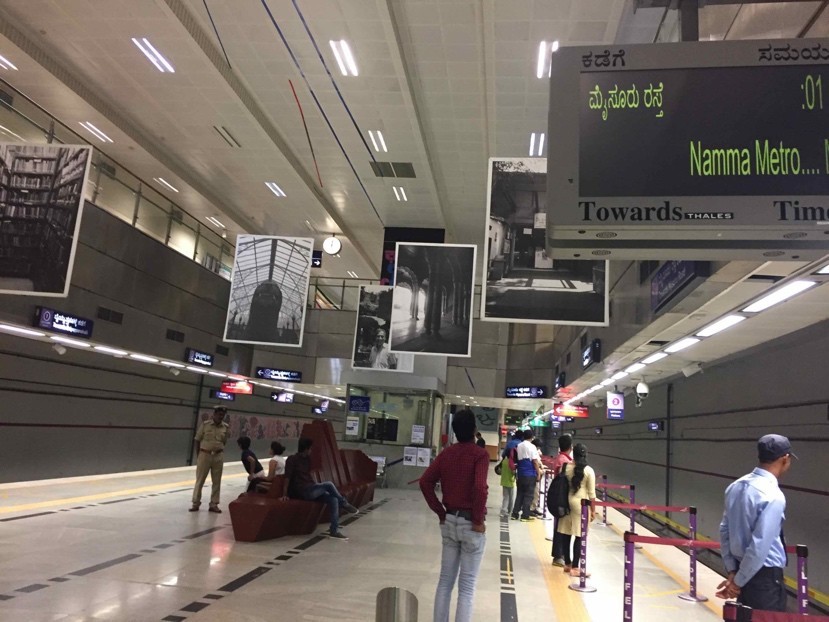 The Managing Director of BMRCL (the Bangalore Metro Corporation), in his only interview with me, made it clear that I would not be given access to interview officials, employees, or commuters. I was, therefore, compelled to enter the metro world as a guerrilla ethnographer on the run. Over the past five years, I have gained insight into the lives of metro workers only through hushed conversations and clandestine meetings, and watched from the sidelines as living spaces and neighborhoods were decimated under metro earth diggers.

Abu’s Kitchen
Abu sees himself as a fakir of sorts. His home used to be under the chajja (awning) of the City Corporation office inside the Banda Ground, the only open space in the dense and diverse neighborhood of Bamboo Bazaar. He slept under the stars and spent his time taking the name of Allah and hoping to reach Jannat (paradise) when his time came. The kitchen fire burned once a day under the neem tree fed by drift wood and cardboard scraps. Occasionally, someone bought him tea from the shack across the road. Abu’s most prized possessions—a few utensils and a print of Mecca—were stashed away inside the wreck of a junked car.

Three years ago, the under-construction Pink Line shifted its alignment and swallowed Abu’s home along with three other playgrounds in less than a 2.5 km stretch. The only open social spaces in three dense lower income neighborhoods were taken for stations, thereby depriving children and adults of the space to gather, play, pray, and celebrate.

Today, Banda Ground is a large crater. Residents feel the shocks of underground tunnelling through their walls in the dead of night. Abu, now homeless, is untraceable. Yellow markers run across homes designating them for demolition. None of the residents are aware of any plans for relocation. When the stations are built, there will be no indication of what stood there and what was lost. 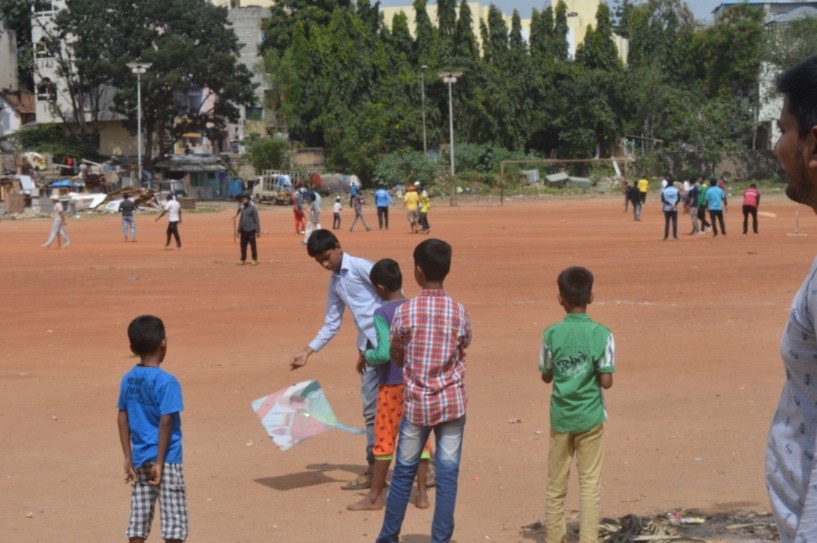 Children at the Banda Ground 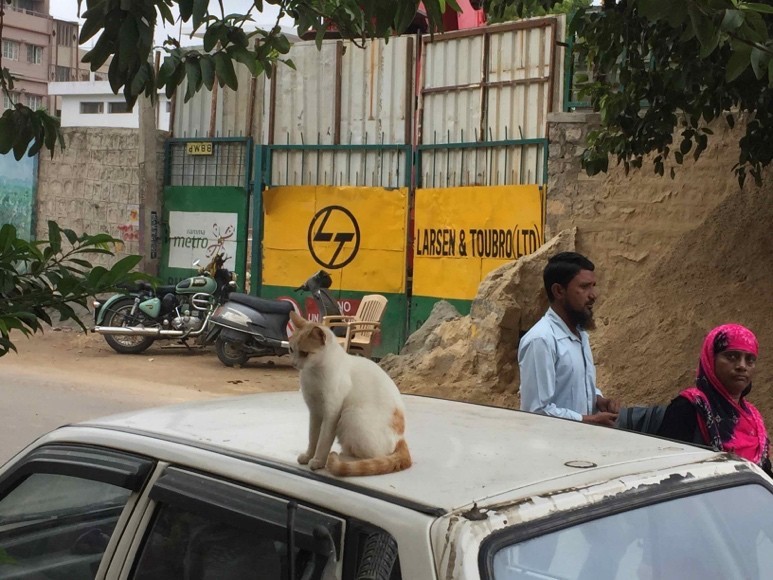 A view of the Banda Ground 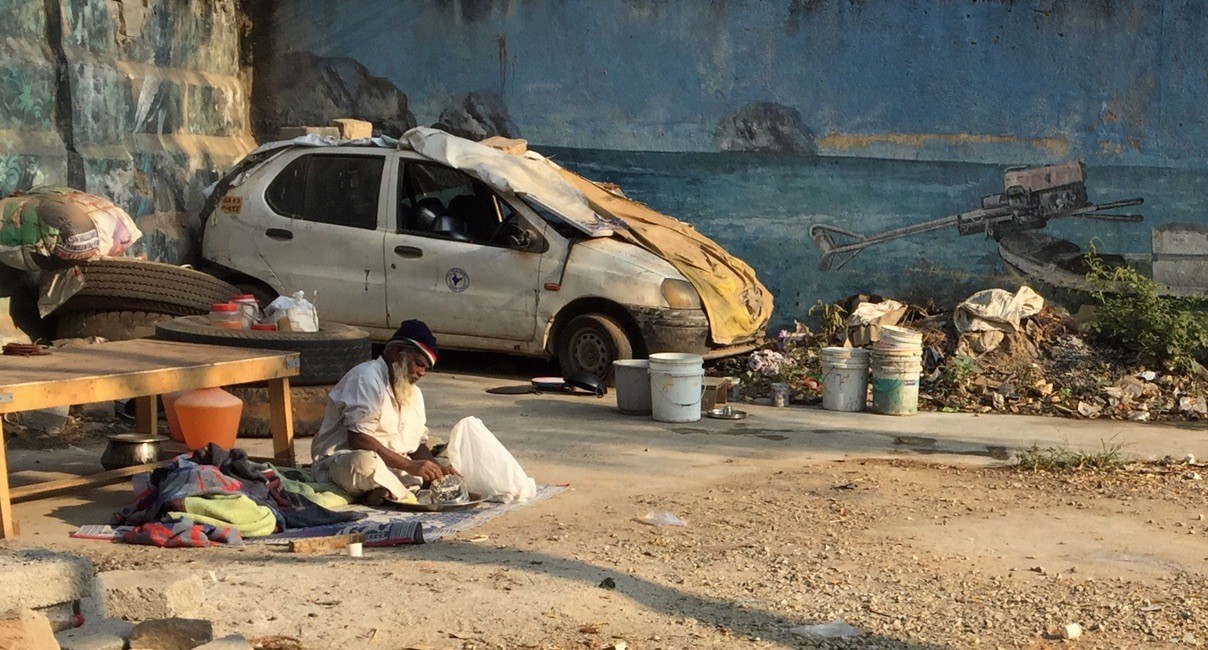 The metro corporation has been charged consistently for being opaque and bypassing participative processes. Not only are the goings on in a construction site obscured by green tin barricades, but decisions about alignments and sudden shifts are also shrouded in silence even for those who would be directly impacted.

Ghosts in the Machine
Last year, a woman guard, whose duty it was to keep commuters away from the platform edge, fainted and plummeted onto the tracks. Luckily, she escaped the electrified rail and was sent home. Apparently, she never reported back to work. Swamy, the leader of the metro workers’ union, explained that she might have collapsed out of exhaustion. Moments such as these tell a larger story about social relations that move the metro.

The metro is run on state-of-the-art digital technology. Master computers and complex algorithms control the logistics, scheduling, and movement of trains. Although underplayed in official narratives, the whole enterprise rests on intimate connections between humans and non-human interphases—be they brooms or computer panels. However, work arrangements are hierarchical with variegated pay scales and contracts. Pay and benefits range from approximately Rs. 12,000-15,000 ($150-190 USD) a month for housekeeping and security workers to an average of Rs. 30,000 ($385 USD) for a train operator, to undisclosed amounts paid to managers, many of whom are deputed from government services. Consultants negotiate their salaries independently. At the lowest end of the salaried scale are the only “permanent employees” of BMRCL, i.e., workers like Ashok who maintain and operate the trains. Security and housekeeping staff are at the bottom end of the contract workers’ pyramid. The low pay forces many of them to moonlight to make a living wage. Women guards say it is impossible to bargain with contractors as they are simply told to accept it or quit. As Nandini Gooptu notes, the uneven pay scales and highly exploitative contract jobs are the norm in many organizations, and not unique to BMRCL. 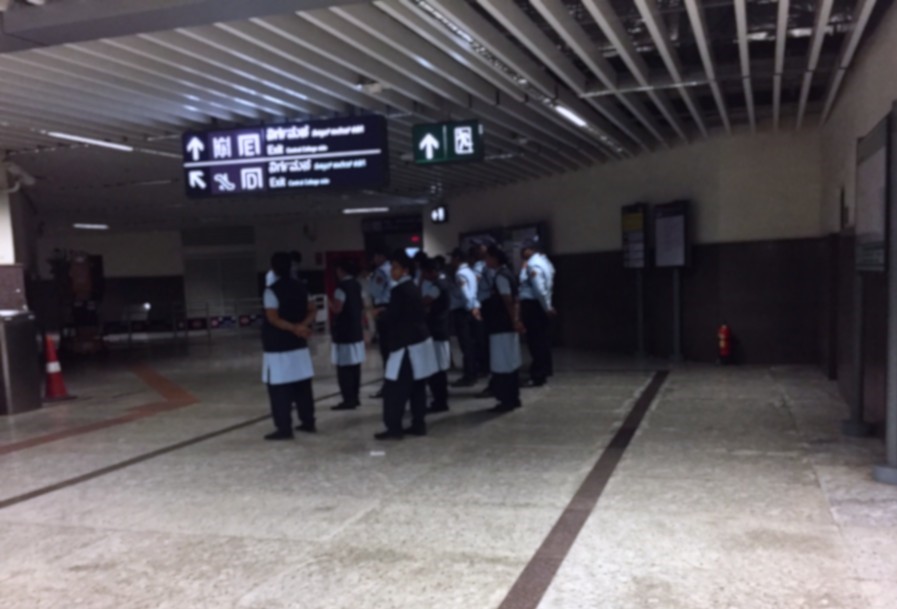 Women guards at a morning drill

Hidden from Sight
The metro presents a curious case where the workplace is high-tech but social relations echo archaic practices that produce massive divides between those who “manage” and those who “work.” The Union, which was formed over seven years ago, is yet to be recognized. According to “the management” there are no “workers” as all employees work with “technology.” Employees are, therefore, unable to claim the protection granted by the Industrial Disputes Act (1947), from which flow a host of rights, including the right to bargain for fair wages and work conditions. Furthermore, workers are mandated to sign a “mum clause” (i.e., a non-disclosure agreement) that prevents them from disclosing workplace goings on, including employment inconsistencies and grievances, to the public or press. Workers say that they are under constant surveillance thanks to the numerous CCTVs and have to watch what they do and say.

In his 2011 ethnography of a slaughter house, titled Every Twelve Seconds: Industrial Slaughter and the Politics of Sight, Timothy Pachirat writes about surveillance and silencing mechanisms that hide the brutal conditions of meat production from the public. Meat on the plate is “civilized” by keeping the savagery of industrial killing out of public view. While the analogy of the slaughter house may seem extreme, the essence of Pachirat’s argument is relevant: techniques of perpetuating silence and secrecy are necessary conditions for maintaining the edifice of the metro as a “good” and “clean” presence in the city.

What does this mean for a city (and a nation) in transition? Metro lines produce a hierarchy of “publics” depending on their impact on places, people, and everyday life in the city. The applause for the metro—some of it deserved—has drowned out the stories that speak of a darker side. As more cities acquire the metro (about 50 more cities in the near future) they also inherit the complex organizational practices and “working norms” that are hardly transparent or inclusive. Residents’ battles for a livable city becomes more difficult when fought on invisible terrain. The outcome of these contestations can either transform the metro into a partner for an inclusive urban future or make way for a juggernaut that stamps its vision of an imagined city over places and people.

Usha Rao (Ph.D. Anthropology UMass Amherst, IIT Delhi) is an independent researcher, media maker, and anthropologist. This article is based on ethnographic fieldwork on the Bangalore metro from 2015-19 and is part of her doctoral work. Her work on the Banda Ground is an ongoing project. All photographs by the author. All names have been changed.