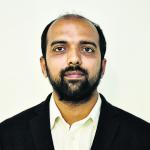 India has announced a 21 day national lockdown, beginning March 25, to prevent the spread of the COVID-19 pandemic in the country. Barring essential services such as food supplies, healthcare, banking, and law enforcement, everything is shut down during this period. This also means that a very large share of India’s 400 million-plus workforce will not be able to access the labor market and make earnings. This unforeseen calamity has the potential to fundamentally change India’s political economy landscape.

Even though India has fared badly in terms of generating “good jobs” for vast majority of its workforce, its informal markets have kept a large section of workers in a low level equilibrium trap of sorts. We cannot forget that at no point in time has India imposed restrictions on rural-urban or inter-state mobility of labor, which is not very uncommon in countries in east and south-east Asia. Even unskilled workers travel thousands of kilometers to find employment in India. Working in the informal sector has also limited collective “class action” in favor of a common set of demands despite having to live with inequality in almost every aspect of life, including the ability to live through illnesses. This is why conventional trade unions have been struggling to have any significant impact on policy or politics for a long time.

All of this might change once this crisis is over as, for the first time, this foot-loose and completely unprotected labor has faced a direct hit inflicted by the state on the ability to sell its labor power. Even when this crisis is over—and let us hope it’s over sooner rather than later—the memories of this shock, and the economic pain associated with it, will remain entrenched.

The Indian economy has changed in many significant ways, especially in the last three “post-reform” decades. Among the most important facets of this transformation has been the movement away from agriculture to non-agricultural sectors. In terms of share in GDP, agriculture now accounts for less than 15 percent of the total economic output. This figure was 27 percent in 1990. Agriculture still accounts for a significant share of the workforce though. According to the 2017-18 Periodic Labour Force Survey (PLFS), more than 40 percent of the workers were employed directly or indirectly in farming. To be sure, these headline numbers on income-employment shares could be misleading. Even in villages and among households employed in agriculture, non-farm incomes are actually a significant and increasing share of overall earnings.

This is borne out by household level income data and other methods such as village-based studies. One such example is the one-of-its-kind five-decade-long study of Palanpur village in the Moradabad district of Uttar Pradesh. In their book How Lives Change: Palanpur, India and Development Economics, Himanshu, Peter Lanjouw, and Nicholas Stern use the village level data to show that share of cultivation in total household incomes went down from over 60 percent in the 1970s to just one-third by 2008-09. The share of non-farm incomes, on the other hand, went up from around 10 percent to almost 50 percent during this period.

The importance of non-farm work cannot be explained just by its share in total incomes. The ability to migrate and seek non-farm work outside villages has also allowed workers to escape the stigma associated with certain kinds of manual work within one’s own village. For example, upper caste Thakur workers in Palanpur were willing to unload railway wagons in a neighboring town for a living, a kind of work which they would never do in Palanpur, lest it degrade their upper caste social standing. The short point is non-farm work-related migration has not only augmented incomes; it has also opened up new avenues of work for a large number of workers. The closure of this market therefore is a double whammy for the daily wage workers.

It needs to be remembered, even with all the migration and informal work, the vast majority of Indians can barely make ends meet. Almost half the total consumption expenditure of average Indians was spent on food items in 2011-12. This share is significantly higher for the bottom half of the population. 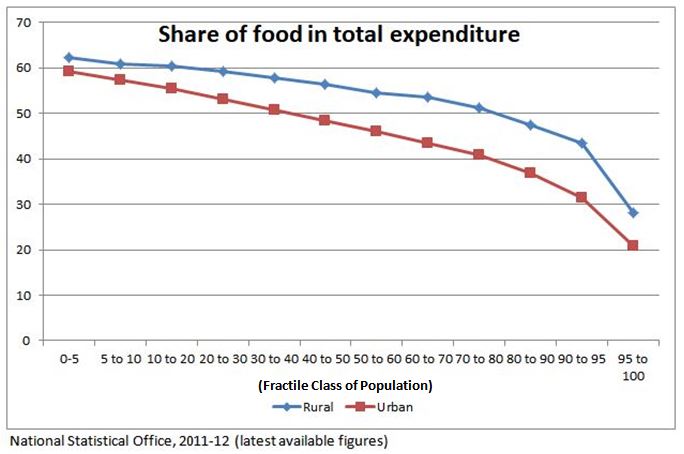 Because the government did not release the findings of the 2017-18 Consumption Expenditure Survey (CES) by the National Statistical Office (NSO), we do not know what these numbers are today.

Such a high share of consumption expenditure on food also means that a large number of workers lead a hand-to-mouth existence in the country, and will find it very difficult to even get two square meals a day if their daily work is disrupted. While India does have a food security program, which is expected to cover two-thirds of the population, making the entitlements portable is still a work in progress. This means that short-term migrant workers are not very likely to have access to its benefits. Also, for a migrant worker living outside his home, food is not the only necessary expense. Managing things such as rent payments is an equally big headache in the absence of regular flow of work. Millions of workers must be having a very difficult time at this moment. Anecdotal reports of thousands of workers walking on foot to their homes hundreds, even thousands of kilometers away confirm this.

To be sure, it can always be argued that the current economic pain due to the lockdown is not unjustified. After all, if the pandemic starts infecting people at a widespread rate in a country like India, the consequences can be catastrophic. However, what is also true is that there is a fundamental asymmetry in this entire trade off. While the benefits of a lockdown preventing the infection from spreading would equally accrue to everyone, the costs will be disproportionately higher for the poor, who, unlike the better off, have neither the luxury of working from home nor enough of a savings pool to exhaust while not earning. In this case, it could even be said that the disease has been brought home by the rich, as it originated in a foreign country, and the poor had absolutely no role to play in its spread.

It also needs to be reiterated that under normal circumstances, the poor are actually more vulnerable to deaths from being ill, as they can neither avail treatment nor afford adequate diets to recover from their ailments. A 2015 story published in the Hindustan Times had quoted research at the All India Institute of Medical Sciences in Delhi (India’s pre-eminent state run hospital) to show that 50 percent of patients with severe head injuries died due to extreme poverty as their families did not have the economic means to ensure adequate diets or nursing facilities. The AIIMS study is not a one-off case. Research based on the India Human Development Survey (IHDS) data shows that the poorest Indians are almost twice as likely to die compared to the richest even when they are healthy. This triples when an illness is involved. There is another way to look at these statistics. For a person belonging to the poorest 20 percent population, the chances of dying increase by a multiple of 1.9 if they are ill, whereas this increases only 1.2 times when the person belongs to the richest 20 percent of the population. 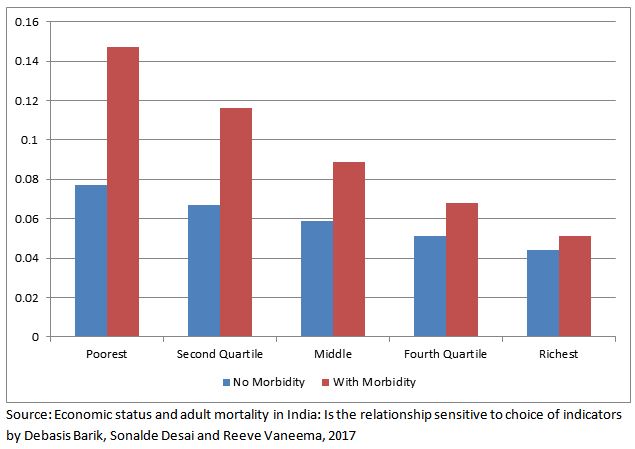 The numbers cited above, which represent the associated probability of dying with and without morbidity, capture the macabre reality of the Indian economy. A very large section of our population has been living a hand-to-mouth existence while hoping they either don’t fall ill or just live through their illnesses when they do.

Why have the people accepted living in such harsh conditions? There are two possible reasons. One, never has this crisis manifested itself at the macro level. So there has not been a macro anger or response to it. To give a crude example, one could take the cases of hundreds of poor children dying due to various forms of encephalitis within days in the states of Bihar and Uttar Pradesh. The deaths in such episodes have often reached significantly higher numbers than the number of deaths due to the current pandemic in many countries. However, such instances have not led to macro level agitations demanding better health services at affordable rates for the poor. The second and more important reason is that while the state did little to help the affected in these problems, it did not impose an extra economic burden on the poor by enforcing a lockdown and disrupting the normal economy. This probably created a situation where the individual effort was focused on saving oneself from what are actually macro level problems. Given the asymmetry between costs and benefits of the current lockdown, the poor might actually, for the first time, see the systemic inequalities as a macro level problem and seek recourse from the state.

While there is little clarity on when the current crisis will end, and whether or not we will see a second or third wave of the outbreak, such fears will clearly remain. It is not very difficult to argue that a change in policy regime could actually go very far in insulating the poor from the terribly high economic costs of the economic disruption due to such outbreaks in the future. Examples of these could be provisions for increased income/food transfers in such emergencies, significantly augmenting public health infrastructure; both in terms of quantity and quality to protect the poor during such crises, and even ensuring some sort of payment to daily wage workers during other illnesses that prevent them from working.

If a political party were to push for such changes, it could actually be pretty successful in mobilizing a large section of the poor behind these demands. While the poor have little say in shaping India’s intellectual or public discourse, they do have a significant role in deciding political outcomes.

Whether or not this happens will depend on how political parties, both in power and in the opposition, both national and regional, take up these issues with a clearly defined set of demands and mass outreach. We will see a lot of politicking over governments’ handling of the current crisis both in India and abroad. However, it remains to be seen whether political parties in India decide to exploit the specter of the current pandemic to demand a redrawing of political economy alignments in favor of the poor.

Roshan Kishore is a Data & Political Economy Editor at the Hindustan Times, and a CASI Spring 2020 Visiting Fellow.