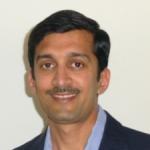 The second COVID-19 wave ravaged India and the country’s health system collapsed, even for the relatively wealthy upper middle classes who previously enjoyed world class private medical facilities. Basic amenities such as hospital beds, oxygen, and life-saving medicines were in severe short supply. According to official estimates, more than 300,000 people lost their lives, but the unofficial estimates put this number between 3 and 4 million. While the country’s immediate focus was on the health crisis, there is also an immediate need to address the economic catastrophe as a result of the second wave and learn lessons from the crisis after the first wave.

India’s first wave, last year, was relatively mild in terms of health impact, but the lockdowns and other containment measures imposed led to an economic crisis. A hundred million workers lost jobs during the nationwide lockdown between April–May 2020. The repercussions of the crisis were so severe that even when the economy had mostly opened up by the end of 2020, the country saw only partial recovery in labor markets and household incomes as about 15 million workers continued to remain out of work. Seasonally adjusted per-capita incomes in October 2020 were 16 percent below their levels in February 2020.

“State of Working India 2021: One Year of COVID-19,” a May 2021 report by Azim Premji University, documents the impact of the pandemic on jobs, incomes, inequality, and poverty with a focus on the first wave. The report also examines the effectiveness of policy measures that had been undertaken after the first wave to offer relief. It uses data from a nationally representative monthly panel household survey on employment and earnings conducted by the Center for Monitoring Indian Economy (CMIE) and two surveys that investigate the impact of relief measures implemented after the first wave.

The impact of the first wave on women’s employment has been far more severe than that on men. During the 2020 lockdown, and in the months after, 61 percent of working citizens did not lose their jobs, 28 percent lost jobs but were reemployed before end of the year, and 7 percent lost jobs and were unable to find work again until December 2020 (the last month for which data is currently available). For women, during the same lockdown, only 19 percent remained employed, whereas 47 percent suffered a permanent job loss, not returning to work even by the end of 2020.

Figure 1: Women who were working were more likely to lose employment and not return to work than men 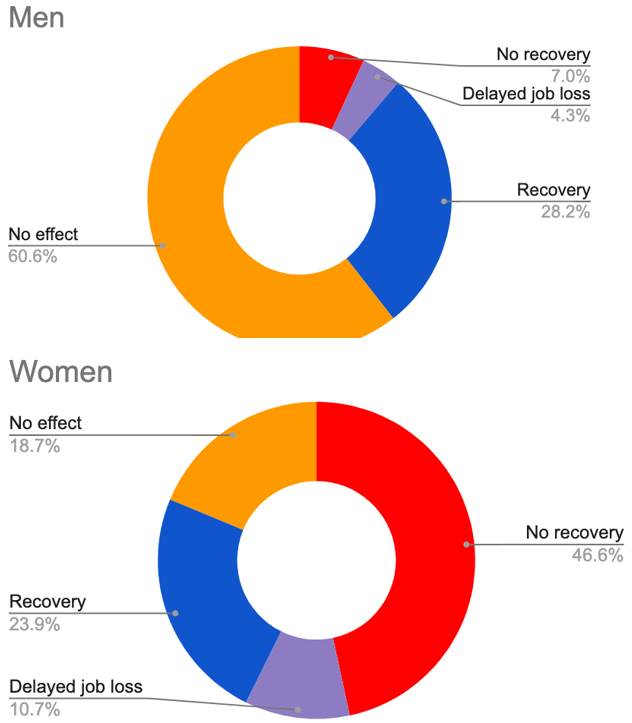 Informalization increased substantially during the first year of COVID-19. Nearly half of formal salaried workers moved into informal work, either as self-employed (30 percent), casual wage (10 percent) or informal salaried (9 percent) workers by the end of 2020. Last year also saw agriculture, construction, and petty trade acting as important fallback sectors, but the capacity of these sectors to absorb another influx of workers is likely to be constrained after the second wave.

The impact of the pandemic was regressive, with poorer households being among the worst affected. The cumulative loss in incomes between March–October 2020, as compared to pre-COVID months, is higher for the lower percentiles and decreases for higher percentiles before showing a small increase again at the very top of the distribution. During this time, an average household in the bottom 10 percent lost Rs. 15,700, which was equivalent to losing more than two months’ worth of income.

Figure 2: Relative decline in income is higher for poorer households 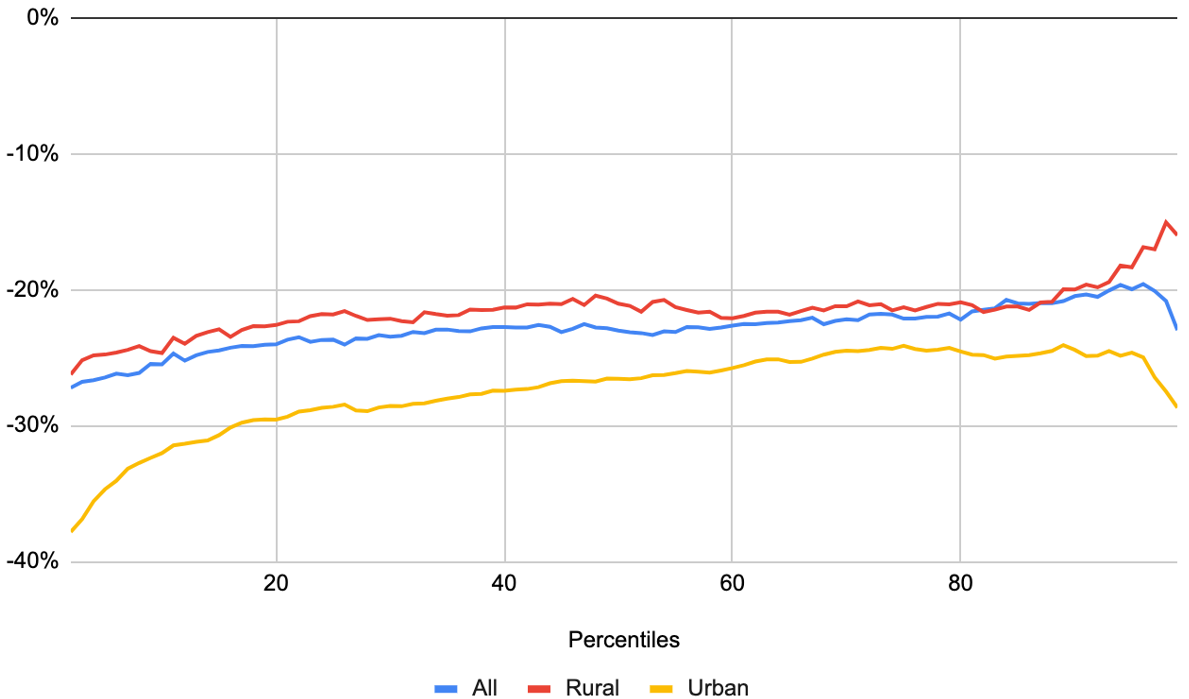 Sources and Notes: State of Working India 2021. These are Growth Incidence Curves for seasonally adjusted incomes in the first eight COVID-19 months (March–October 2020) as compared to the eight months preceding COVID-19 (July 2019–February 2020) for each percentile. See Appendix of the report for details.

Figure 3: Massive increase in poverty seen during the pandemic 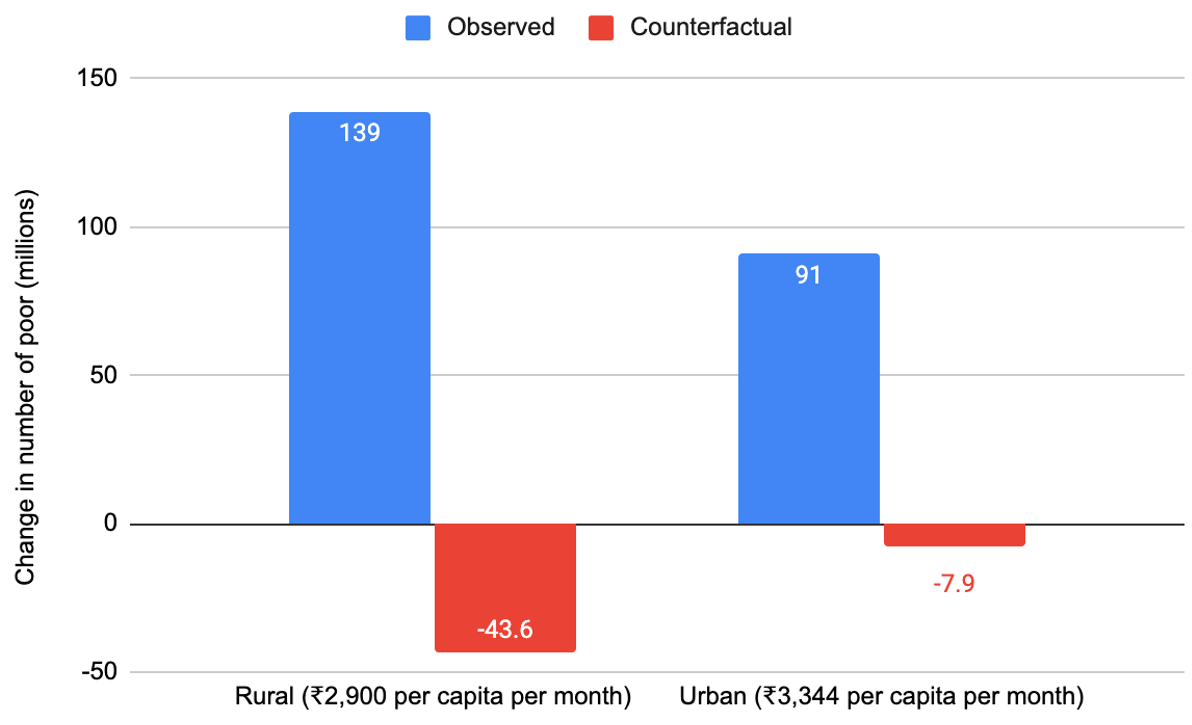 Even though central and state governments announced various relief measures, they reached only a fraction of the vulnerable population. Two major support measures were the additional rations under the Public Distribution System (PDS) and the Rs. 500/month cash transfer for three months for women who had Jan-Dhan accounts. The cash transfers were vastly inadequate as households in the bottom decile lost Rs. 15,700 between March–October 2020. In addition, the reach of the cash transfer programs was very limited; among vulnerable households, only 50 percent were eligible.

The second wave’s economic shock will be devastating as it arrives on the heels of the first wave, which depleted any savings or coping mechanisms households had. Additional government relief measures are urgently needed to protect households from the worst impacts of the second economic shock in less than a year. The report proposes the following urgent policy measures: extending free food transfers until, at least, the end of 2021 (which has been partly implemented); cash transfer of ₹5,000 for three months to as many vulnerable households as can be reached with the existing digital infrastructure; expansion of the existing rural public works program and increasing the program’s wages up to state minimum wages; and launching a pilot urban employment program in the worst hit districts, possibly focused on women workers.

Failure to act has already undone the years of progress made in achieving lower levels of poverty. This rise in poverty, combined with further loss of savings and productive resources, may also push households into vicious poverty traps and add to nutritional and educational deficits. Furthermore, we may see a worsening of the already significant gender gap in the workforce as more women continue to leave the labor market. Young workers may also experience sustained impacts on their earning capacity and productivity due to these lost years of experience. Simply put, any further delay in the implementation of these basic safeguards will not only lead to a continuance of the hardships that the majority of the country is currently braving or succumbing to, but will also result in numerous long-term negative ripple effects.

Rahul Lahoti is a Researcher at ETH Zürich and Visiting Faculty at Azim Premji University. “State of Working India” is a publication of the Centre for Sustainable Employment at Azim Premji University. The following contributed to the research discussed in this article: Amit Basole, Aishwarya Gawali, Anand Shirvastava, Mrinalini Jha, Surbhi Kesar, Rahul Lahoti, S. Nelson Mandela, and Paaritosh Nath.