"In Defense of the Indian Voter," Neelanjan Sircar. India in Transition. February 10, 2014

The Numbers Game: An Analysis of the 2014 General Election 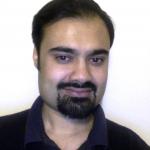 At the outset it should be clear that in a multi-party first past the post system discrepancies between vote shares and seat shares are the norm, not the exception. In the last UP Assembly election, the SP won 224 seats with 29.15 percent of the vote while the BSP won just 80 seats with 25.91 percent of the vote. A closer look at the election numbers not only explains the BJP’s ability to convert vote percentage into winning seats, it also sheds light on attitudes in the Indian electorate.

The BJP contested a total of 428 constituencies, winning in 282 and accounting for a 66 percent strike rate. However, there is considerable variation in the strike rate by region and by party opponent. 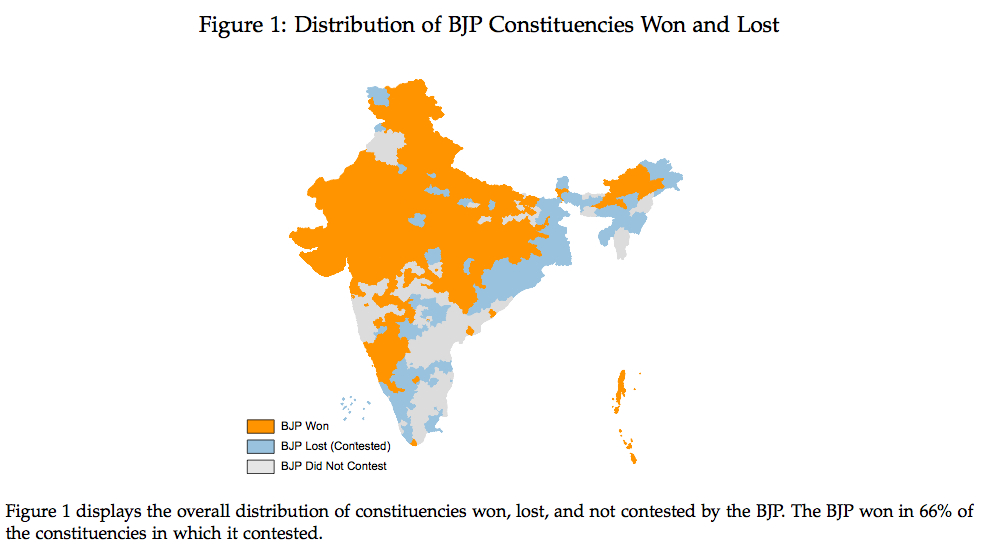 The BJP’s seats are extremely regionally concentrated. Six states alone – Bihar, Gujarat, Madhya Pradesh, Maharashtra, Rajasthan, and Uttar Pradesh – contributed 194 seats to BJP’s kitty, 69 percent of the total number of seats won by the BJP. In these states, the BJP’s strike rate was an incredible 91 percent among seats that it contested (it did not contest every seat in Bihar or Maharashtra due to pre-poll alliances), but these contested seats comprise only 39 percent of the contestable seats in the general election.

Outside of head-to-head battles with Congress, and outside of Bihar and Uttar Pradesh (where the strike rate was 85 percent), the BJP contested 144 constituencies, but was competitive in only 56 of them. Even when it was competitive, the BJP had a lower strike rate of 63 percent. In short, the numbers demonstrate that the success of the BJP in this election was due to its spectacular strike rate against Congress and its remarkable performance in Bihar and Uttar Pradesh. These two categories account for 247 of the 282 BJP seats won in this election. 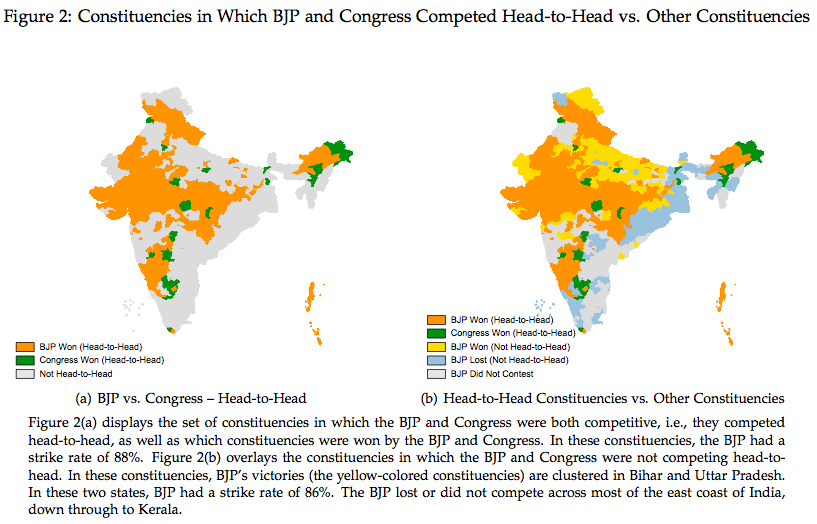 How does this help explain the BJP’s ability to convert vote share into seats? The answer lies in the strike rates in the analysis above. When the BJP was contesting head-to-head against the Congress, or when it was in Bihar and Uttar Pradesh, its strike rate was extremely high. Outside of this, however, the BJP wasn’t particularly competitive. In other words, there were very few BJP “wasted votes.” When people cast their ballots for the BJP, it was very likely to be in constituencies in which the BJP won. 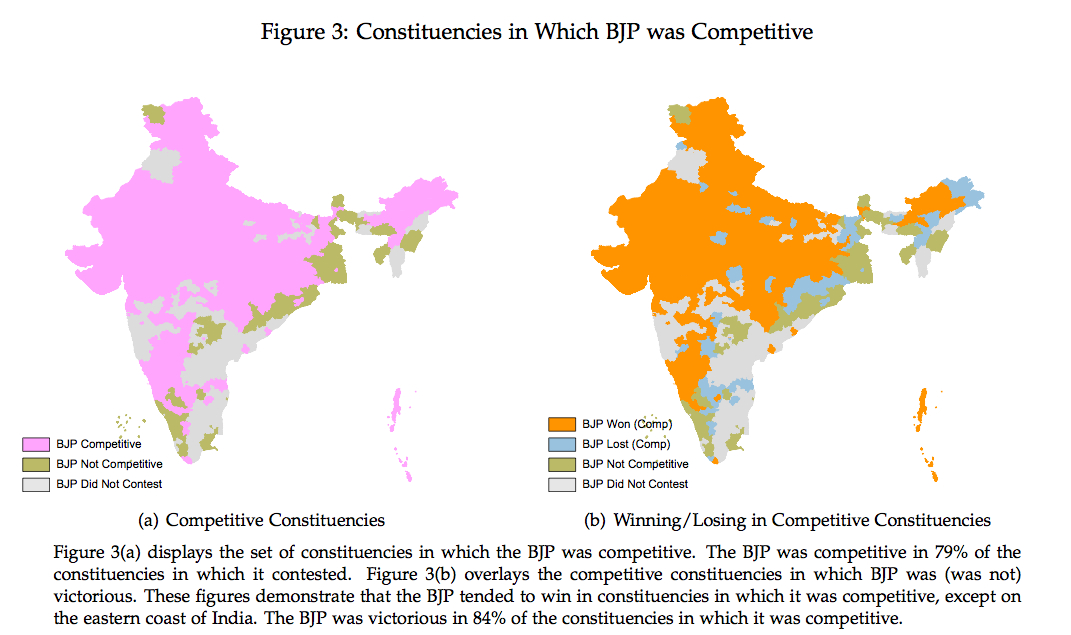 Where is the BJP not winning its seats?
For as well as the BJP did in these elections, it still had a hard time breaking into states with strong regional parties and regional identities. This may seem like an odd statement given that the BJP did so well in Bihar and Uttar Pradesh, but many people discount the fact that the BJP already had strong bases in those states. The BJP had been a part of the ruling coalition at the state level in Bihar until June 2013 and it was the largest party in the 1999 Uttar Pradesh Lok Sabha elections (and has had double digit seat share since).  In this sense, it was not “breaking into” these states. 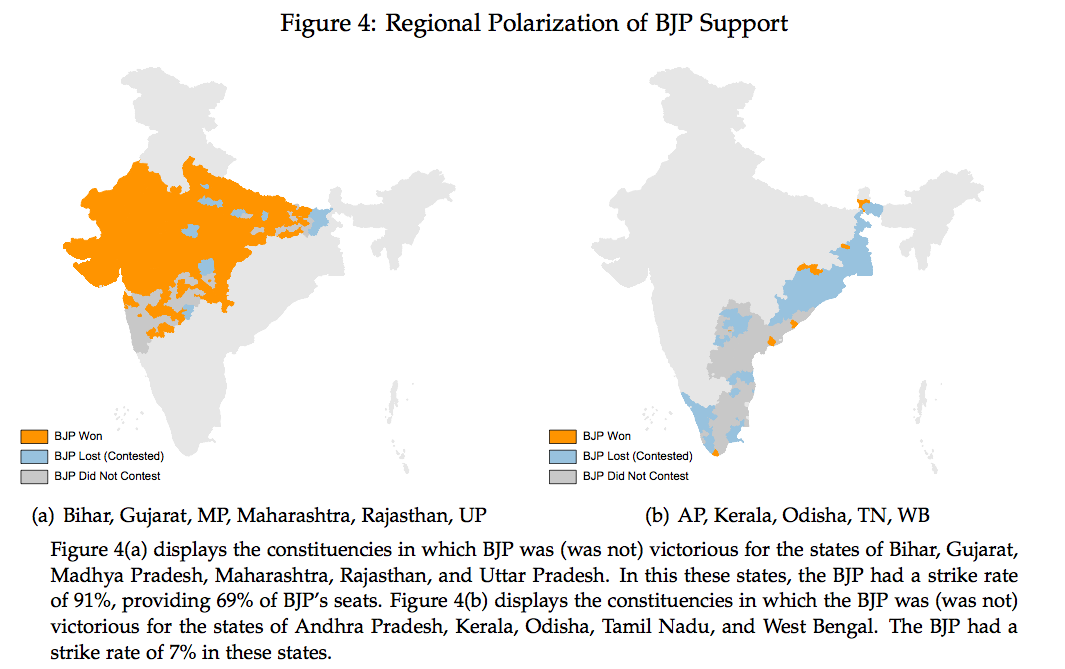 Interpreting the data
In pre-election analysis conducted by the Center for the Advanced Study of India (CASI), using surveys from the Lok Foundation, we argued that the major concerns in the electorate – economic growth, corruption, and inflation – centered around the larger macro-economy. These concerns, packaged with the charisma of Narendra Modi, generated a cogent, powerful national campaign. Congress, on the other hand, found itself in no man’s land, unable to find a solid national identity and too enfeebled in the parts of India with strong regional identities to mount much of a challenge. Congress’ attempt to paint itself as the party of welfare benefits never really took off; voters understood that most welfare programs also require coordination of bureaucrats and state-level implementation, and myriad corruption scandals served to chip away at the credibility of Congress in delivering those benefits.

Those constituencies in which BJP went to head-to-head against Congress served as a referendum on the parties’ respective national visions. The spectacular strike rate of the BJP in these constituencies suggests that Congress never really developed one.

It will be interesting to speculate where the parties go from here. As the data suggests, it will be difficult for the BJP to seriously break into states with strong regional identities. Will it devote significant resources toward this effort or instead, consolidate its power in the places it has already swept? The Congress party, for its part, needs to completely reinvent itself, address its leadership dilemma, and develop a more compelling national vision.

The BJP emerged as the only party with a persuasive national vision in this election, but, as its vote share reveals, this does not mean it is representative of all of India. Apart from the apprehensions of India’s Muslim community, the data shows that significant swaths of India were relatively unaffected by the “Modi Wave.” One of the new government’s challenges will be to address the obstacles generated by this regional polarization. Much will depend on the personal equations that the Prime Minister establishes with the regional leaderships. This will likely be relatively easier with Tamil Nadu, somewhat less with Odisha, and perhaps most difficult with West Bengal.

Neelanjan Sircar is a CASI Visiting Dissertation Research Fellow and a Doctoral Candidate in the Department of Political Science at Columbia University.