The Paradox of India’s Green Revolution 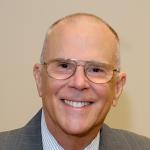 More than five decades after India launched the Green Revolution, its war on hunger is far from won.

The impetus for the Green Revolution came from harvest failures and famine conditions in the mid-1960s. But its main goal was to ensure India’s national food security, more precisely its self-reliance in food grain production. We can see now that the policies adopted then, and left largely unchanged since, have not only failed to eliminate hunger but also made more intractable the challenge of providing adequate and appropriate nutrition for all of India’s people. These policies have included subsidies for fertilizer and groundwater extraction, minimum support prices for food grains (especially rice and wheat), and procurement and public distribution of grains (also mostly rice and wheat).

Today, India has achieved national self-reliance in food grain production. It has become the world’s second largest producer of both wheat and rice and the largest exporter of rice. Despite the large increases in total production, per capita availability of all food grains has increased only modestly as the population has more than tripled since the mid-1960s. Per capita net availability jumped from 144 kgs per year in 1951 to 171 kgs in 1971 largely due to greater availability of wheat, but over the last 50 years has fluctuated between 170 and 180 kgs. 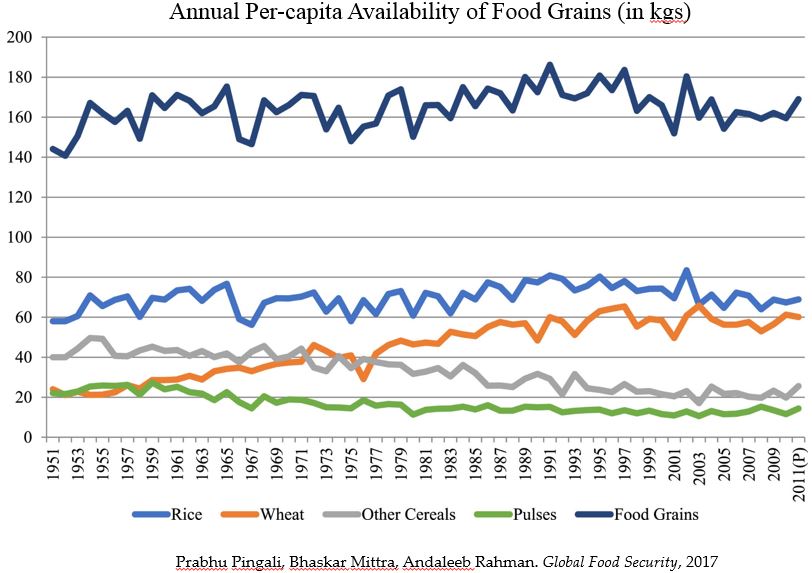 What has changed markedly is that wheat and rice have largely displaced more nutritious pulses and other cereals such as millets in consumption.

Through the Public Distribution Scheme of 500,000 Fair Price Shops around the country, wheat, rice, and sugar are supplied to the poor at highly subsidized prices. While the Scheme and its successor programs have clearly provided a vital nutritional floor for India’s poor, especially its urban poor, they have been widely criticized for large leakages to the non-poor and incentives to consume calories and exclude more nutritious foods.

India’s increases in total food production have, unfortunately, not translated into proportionate decreases in malnutrition. While over the last two or three decades, higher rates of economic growth, declining poverty and availability of staples have led to reductions in the number of undernourished to around 15 percent of the population, malnutrition remains stubbornly high. As a result, India ranks 103rd out of 119 countries on the International Food Policy Research Institute’s 2018 Global Hunger Index (GHI) and is home to the largest number of malnourished people in the world, about one quarter of the global total.

Malnutrition in India today is concentrated among children under five. While the rates of child malnutrition have diminished over the last decade or two, child wasting and stunting are still widespread. According to the 2018 Global Nutrition Report, in 2015 about 21 percent of all children under five were wasted and 38 percent stunted. 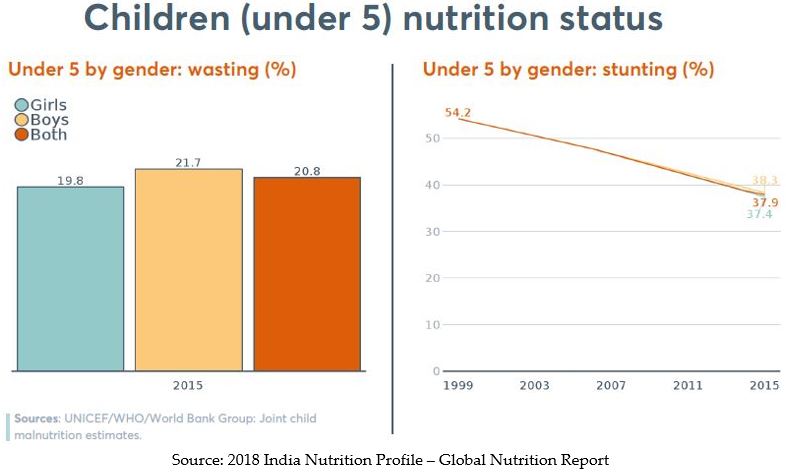 India is also experiencing rapid increases in over-nutrition, largely due to over-consumption of calories. This trend is evident in the rising incidence of overweight and obesity especially among adolescents and adults, but also among children 5-19 years old. It is leading to higher rates of diabetes and other noncommunicable diseases. Already today, mortality due to diet-related diseases is rising more rapidly in India than in many other emerging economies. 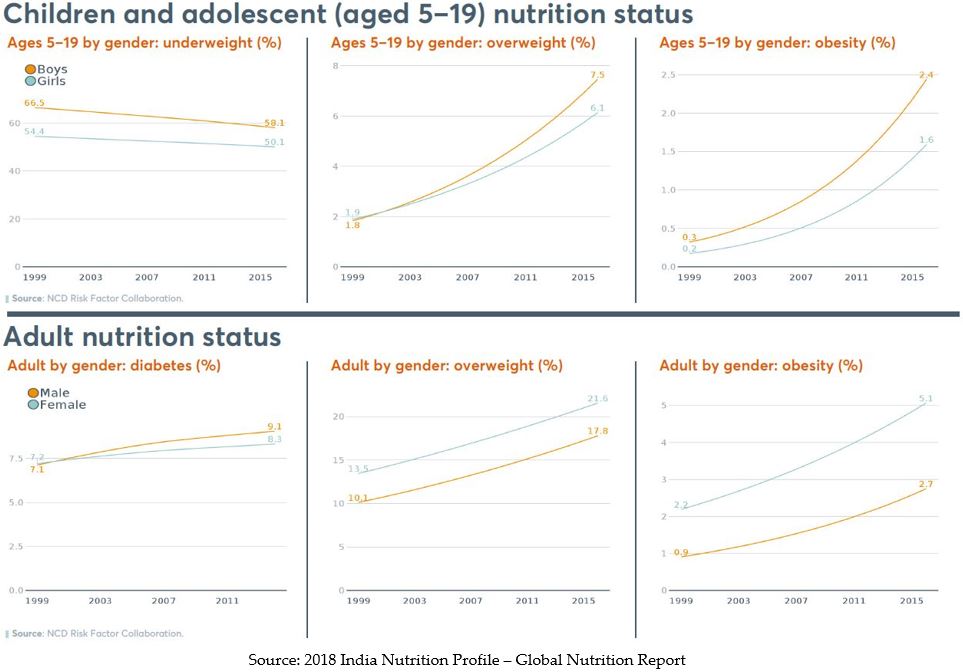 Clearly, one cause of persistent child malnutrition in India is still high rural poverty—25 percent nationally and higher in poorer states, as compared to 14 percent in urban areas. Today, agricultural households account for 50 percent of extreme poverty in India. Major reasons include the government’s failure to change the terms of trade between agricultural producers and consumers and invest adequately in the agricultural sector.

A recent study by the Organisation for Economic Co-operation and Development (OECD) and the Indian Council for Research on International Economic Relations (ICRIER) found that over the last eighteen years, India has implicitly taxed agriculture at the rate of over 14 percent, largely by keeping food prices low for urban consumers. From 1981-2014, the growth of public (Central and States) investment in agriculture and irrigation averaged 4.6 percent and 4.0 percent respectively, well below China’s investment rates at a comparable level of development.

Not surprisingly then, the incidence of malnutrition, especially stunting, is higher in both rural and lower income households, primarily farm households. 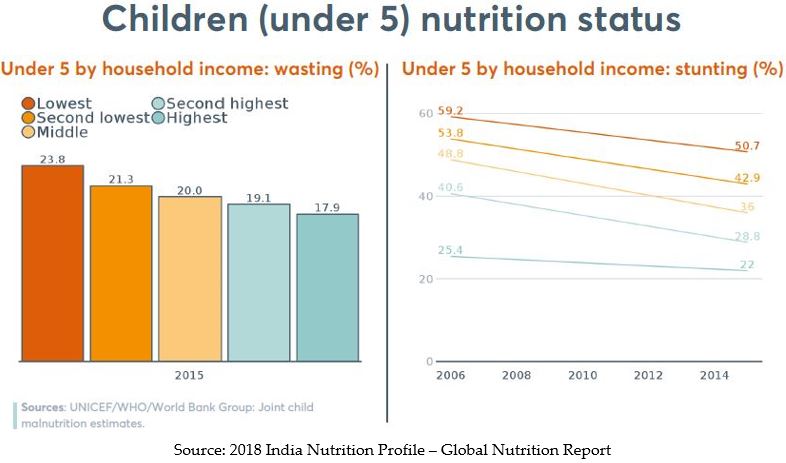 A second cause of persistent child malnutrition is the inefficiencies and distortions of the Green Revolution agriculture and food policies to which I have already alluded. Programs focused on child nutrition such as the Integrated Child Development Scheme, launched in 1975, and the Mid-Day Meals Scheme, introduced in 1995, have not corrected the Public Distribution Scheme’s bias toward calories. Subsidies continued the reliance on rice and wheat and did not include more varied and nutritious foods. 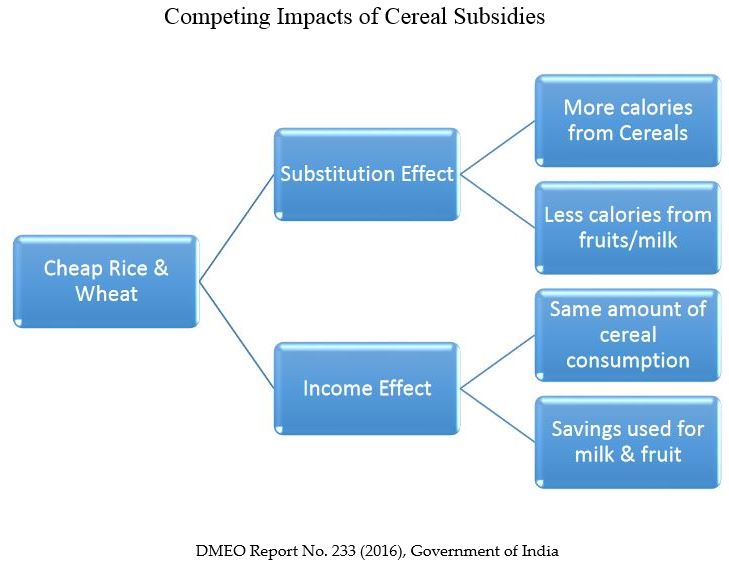 A third cause of persistently high child malnutrition in India has been impure drinking water and poor sanitation. India has made significant strides in improving safer drinking water availability, but according to the 2018 Global Nutrition Report, the prevalence of open defecation, a well-known cause of disease, especially in children, was still about 40 percent in 2015. 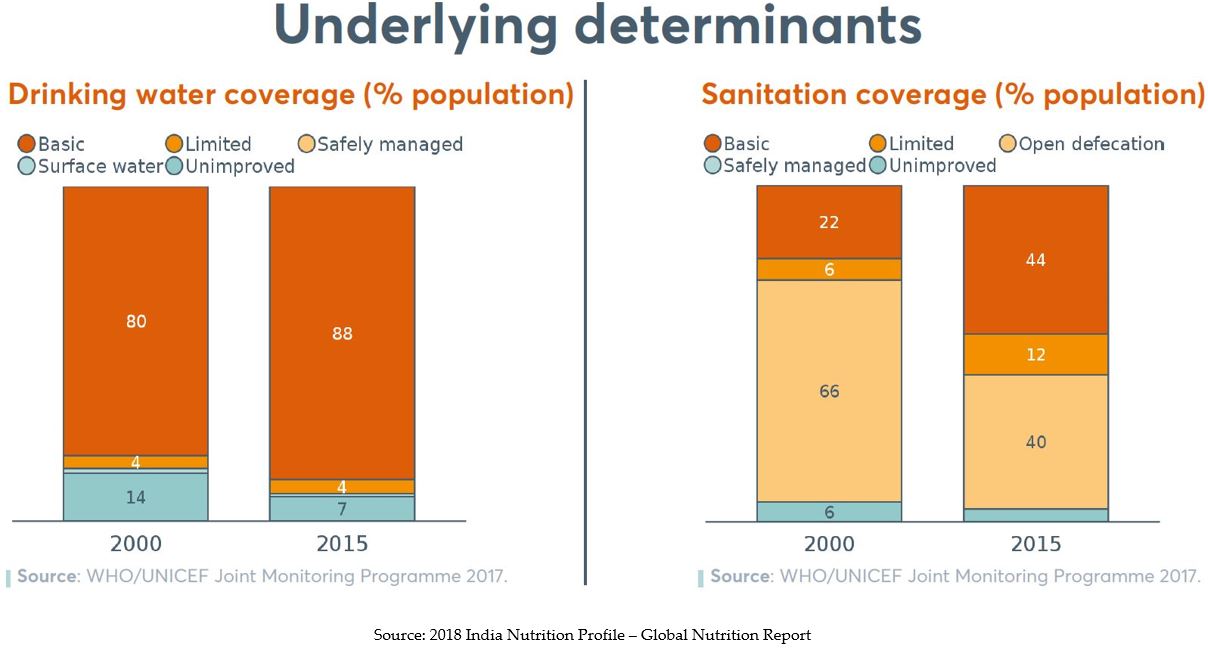 A comparison with Africa is instructive. While the poverty rate in Sub-Saharan Africa is nearly three times higher than in India, and the rates of undernourishment in the two regions are nearly equal, open defecation is more prevalent in India, and so also are child wasting and stunting rates. To Prime Minister Modi’s credit, he has launched a major effort to improve sanitation, the Swachh Bharat initiative, that is clearly showing signs of success.

Looking ahead, poverty and malnutrition in rural India will be exacerbated by increasingly frequent droughts, other weather extremes, and long-term climate change impacts. Successive droughts in 2014-15 and 2015-16 affected much of the country. The International Food Policy Research Institute’s (IFPRI) 2018 Global Food Policy Report projects that 93 million Indians will be at risk of hunger by 2030 and 45 million by 2050, if the expected effects of climate change are considered. 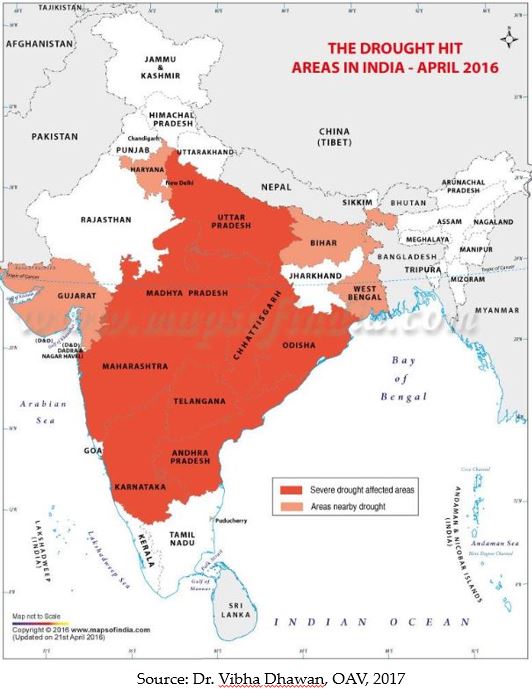 Today, India faces an urgent crisis of child malnutrition and a looming crisis of over-nutrition with long-term consequences for public health. The responses required include:

1) Reforming the Green Revolution policies of price supports, input subsidies, procurement, and public distribution to shift their focus from wheat and rice to more nutritious grains, pulses, vegetables, and fruits.
2) Moving swiftly to increase biofortification of a wider range of foods than is so far included in India’s plans.
3) Improving sanitary facilities, especially in the rural areas where poverty and child malnutrition are concentrated.

In the 1960s, India showed itself and the world it could move dramatically to relieve hunger and feed itself. Today it is at another critical juncture in the search for overall food security. As Prime Minister Modi readies for a historic second term in office, he has the opportunity over the next five years to declare India’s final victory over hunger and malnutrition.