The BJP and Coalition Politics 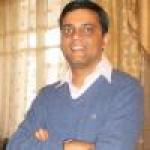 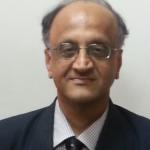 Prior to 2014, India witnessed seven consecutive elections (1989 to 2009) in which no single party won a majority of seats in the Lok Sabha, resulting in minority governments, including unwieldy minority coalitions, dependent on external support.

With the Bharatiya Janata Party (BJP) winning a majority in the 2014 election, and continuing the trend by seizing two states, Maharashtra and Haryana from the Congress in the October 2014 assembly elections, the question arises as to whether coalition politics is still important. To our mind, the answer is an unambiguous yes; pre-electoral coalitions were important for the BJP’s majority in the Lok Sabha, a post-electoral coalition is necessary in Maharashtra, and alliance-building will be for the future in terms of passing legislation and expanding the party’s reach.

The Importance of Pre-Electoral Coalitions in 2014
In contemporary Indian politics, the incentive for national parties to form pre-electoral coalitions are straightforward. Given India’s first-past-the-post electoral system, the aggregation of votes at the constituency level is vital for winning seats. By implication, given the breakdown of the national party system into distinct state party systems, the formation of alliances with parties commanding a significant state-level vote share helps to aggregate constituency-level votes shares in states where one’s own party is not strong enough to go it alone. Hence, pre-electoral coalitions have the potential of increasing the number of seats won although they come at the expense of conceding a certain number of seats to allies, and also including such allies in a post-election government.

The underlying principle is that a third party could leverage expected vote share in states where it is perceived to be a significant third party with a potentially “bridging vote share.” In essence, perceived pivotality for electoral victory helps it to form electoral coalitions with the first or second parties in the states in which it is allocated more seats to contest than in the previous elections

The BJP, since 1989, has grown partly on the basis of its own ideological appeal and mobilization and partly by leveraging coalitions, while the Congress turned to coalitions with success in 2004 and 2009.

The general finding on pre-electoral coalitions is that the seat-sharing ratio between partners tends to get stuck in a narrow band, and does not adjust smoothly according to the demands of a partner who perceives its popularity to be on the upswing. For example, both the Congress-NCP and BJP-Shiv Sena coalitions in Maharashtra, the BJP-Janata Dal (United) (JD(U))coalition in Bihar (until recently) and the BJP-Akali Dal coalition in Punjab, as well as the Left Front coalitions in West Bengal and Kerala, and the Congress-led UDF coalition in Kerala all tended to remain stable in their seat-sharing ratios over the past two or more elections, with adjustments happening within a very narrow band. It is only when old coalitions break down due to one partner demanding a substantial revision of terms, as in Maharashtra in October 2014 for both Congress-NCP and BJP-Shiv Sena coalitions, and new coalitions are formed that new ratios can be established. 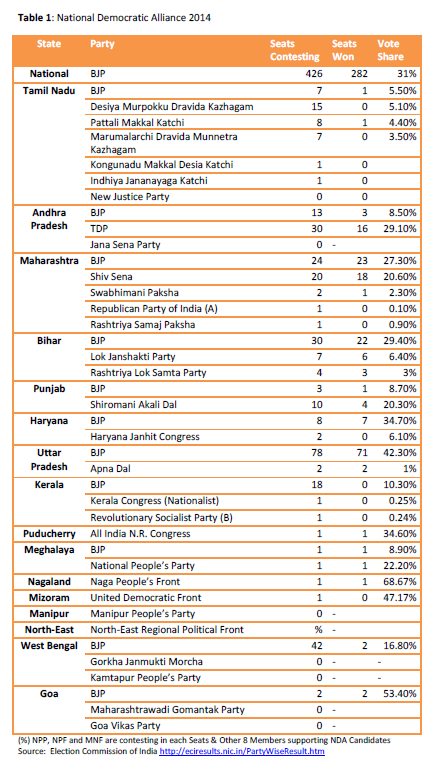 In 2014, the BJP struck a range of new alliances, most of them on more favorable terms than in the past while retaining its key old alliances (Shiv Sena, Akali Dal) on status quo terms. Thus, in 2014, the BJP forged pre-electoral alliances in ten states, compared to six alliances in 2009, in which both it and its partner(s) contested seats, of which seven were new alliances – Bihar, erstwhile Andhra Pradesh, Tamil Nadu, Haryana, Kerala, Meghalaya and UP – and defined by more favorable terms.

While the BJP has won 282 seats, a majority of the 543 elected, in the Lok Sabha, it has formed a surplus majority NDA government with its pre-electoral coalition partners, taking the tally up to 334 seats. However, the question arises as to the stability of the BJP’s majority in future elections and, by extension, the continuing relevance of coalitions.

Of the 282 seats won by the BJP, as many as 57 seats are accounted for by states in which the BJP depended significantly on coalition partners (not counting UP where the Apna Dal was a minor ally). These are Maharashtra (23 seats), Bihar (22), Haryana (7), Andhra Pradesh (2), Punjab (2), Tamil Nadu (1). Even if we assume that two-thirds of these 57 seats would have been won by the BJP contesting alone, this would still leave it 19 seats short of its present total and short of a majority. Hence, the BJP’s majority in 2014 was crucially dependent on vote transfer from its pre-electoral allies, much like the CPI(M)’s majority in the West Bengal assembly in the past depended importantly on vote transfer from other Left Front allies.

The Rajya Sabha and the Continuing Importance of Coalition Politics for the BJP-led NDA Government
Leaving aside the importance of pre-electoral coalitions, the centrality of coalition politics will remain due to the NDA’s dependence on opposition parties beyond the coalition to pass legislation in the Rajya Sabha. At present, the BJP has only 43 members in the 245-seat Rajya Sabha, and just 57 with its NDA allies, well short of the halfway mark of 123. Even if one makes highly favorable assumptions for the BJP in forthcoming state assembly elections through its term, including the October 2014 elections in Maharashtra and Haryana that the BJP won, and factors in upcoming Rajya Sabha vacancies, the NDA’s net gains would still make it fall short of the halfway mark for most, if not all, of its term in office. 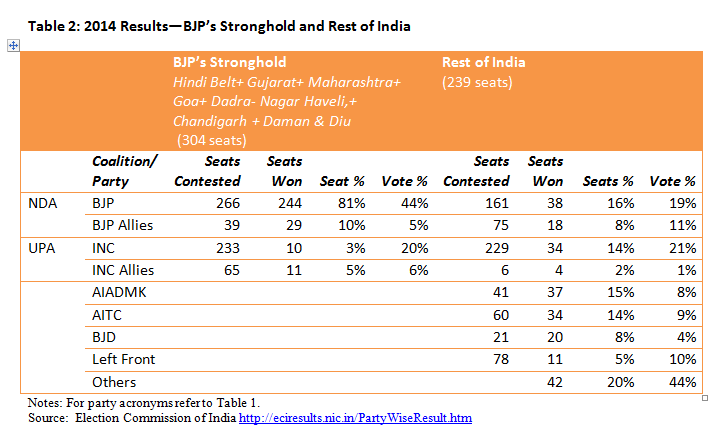 The BJP’s Regionally Limited Presence and the Importance of Coalition Politics
Last but not least, coalition politics will remain important because the BJP’s stated objective is to expand its base outward from its current strongholds in the northern and central Hindi-belt states and the three western states. For this, it will need allies in the other southern and eastern states except possibly in Karnataka and Assam. This is because the BJP’s narrow majority of 52 percent of Lok Sabha seats is very disproportionately based on an unprecedented sweep in the Hindi-speaking northern and central states and Union Territories and three western states and Union Territories. Of the BJP’s 282 seats, as many as 244, or 87 percent came from this Hindi-belt plus western India stronghold, or in other words, it won a whopping 81 percent of the 304 seats in this region, or an even more whopping 92 percent of the seats contested (244 out of 266 contested) in this region based on a 44 percent vote share in this region. Replicating such a strike rate in future elections would be highly improbable. The BJP itself is aware of this fact, hence its realization that an expansion into the south and east will be necessary and will require either an improbable quantum jump in vote share, or more realistically, the formation of pre-electoral coalitions with regional party allies.

For these interlocking reasons, coalition politics will remain important for governance and for the BJP’s electoral strategy over its term, at the Centre and in the states. BJP President Amit Shah’s recent statement in the aftermath of the heady victories in Maharashtra and Haryana that the era of coalition politics is over looks like an overstatement over the longer term.

E. Sridharan is the Academic Director of the University of Pennsylvania Institute for the Advanced Study of India in New Delhi.