"Not Terror, But Male Dominance Stifles Policewomen in India," Pallavi Srivastava. The Times of India. October 5, 2008

Policewomen in India: A Long Way To Go 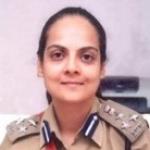 Women in Independent India have evolved with the flow of history, but it has only been over the last thirty-five years that they have experienced the post-industrial revolution and subsequent positives of globalization. These developments have radically transformed their gender relations at home, the workplace, with peers, and possibly in society at large, quite similar to the kind of social transformations women in the United States experienced in the 1960s.

This revolution was specifically linked to the proliferation of higher education and income levels of nuclear families going up throughout the country. The Indian woman ever since has come a long way in being part of the active workforce and has possibly broken all barriers in most professional fields, including that of donning the uniform of the police and the para-military.

Following the 1970s, a combination of societal changes and progressive legislations paved the way for women to enter law enforcement in record numbers. From less than 2 percent in the early 1970s, their percentage has gone up to over 12 percent today, as they continue to leave their mark in this field once considered the last bastion of male domination in the workplace.

The chronicle of women in Indian police started in the early 70s when its first woman joined the uniformed force. She entered the profession at the top of the tier of an extremely hierarchical formation and put in a good three decades of exemplary work. During those decades, thousands of women joined the force from the ranks of constable all the way across the spectrum. In 2010, the Bureau of Police Research & Development (BPR&D) estimated that there are around thirty thousand women in various Indian police forces.However, despite these “achievements,” even a decade-old figure by the 7th UN Survey on the percentage of women police in thirteen Asian countries reflects a very low percentage of women in India’s police force.

The Police in India recruited a decent number of women to the force over last twenty years, but acceptability and assimilation as “equal partners” to men within the professional core has left much to be desired. There are not many studies on this lack of acceptability of women in uniform, but few that exist, such as James Vadackumchery’s Police, Women & Gender Justice (APH Publishing Corp., 2000), point to the fact that women in uniform are still perceived as “they” versus “us” in all rank and file of the uniformed profession. While organizational attitudes are beginning to change, serious problems of work cultures remain in varying degrees in different parts of the country and within different forces, respectively.

Even Ms. Kiran Bedi, the first woman to enter the force at its highest point of entry, and who was celebrated for her sheer grit and being the first “to dare” had to succumb to the predominance of “male camaraderie” within the profession when it came to her being considered for the top job in the national capital.

Overall, women in Indian police have made strides in performing well in an otherwise stereotypical non-traditional career. With experience and good ground observation, it can be safely said that discrimination and contradistinctions vis-a-vis their counterparts are constant and invidious, though subtle. While women are (hopefully) not unwelcome in the profession, having them in key leadership roles is resisted, and exceptionally challenging and important jobs or assignments are “handed over” to the select few with reservation.

Despite a few National Conferences of Women Police Officers, the first three recommendations repeatedly made at all the conferences have not been implemented. By and large, lack of requisite social attitudes and work culture in the Indian society at large, and, in particular, government and its workplace are squarely responsible for the gender bias in the profession.

Between 2005-10, the advertised vacancies for women constables in Andhra Pradesh went unfilled as there were not enough takers for the job. The example may not be a close reflection of the country’s index on the score, but in some other states (Rajasthan, Haryana, Assam, etc.) the intake of women in the police has not been commensurate to the population of those who are clearly in the employable category.

There are many possible reasons for this decline in the number of women pursuing careers in uniform and law enforcement. While research shows that women can be just as effective as men, uneven hiring practices, societal cultural values, selection processes and recruitment policies keep the number of women low. Often, women are screened out of the selection process early on as a result of certain entry-level tests parameters which facilitate only those women who are exposed to athletic sports or physical hardiness.

According to a survey done by the Commonwealth Human Rights Initiative (2007), most women never even consider a career in uniform or law enforcement to begin with due to their misunderstanding of the nature of the job, resistance from family, or the aggressive and authoritarian images portrayed in the media. However, once hired, women face discrimination, sexual harassment, or even peer intimidation, and they often lack the necessary role models or mentors to help them move up the ranks. Many never even take promotional exams, giving first priority to family or personal relationships. In fact, the attrition rate of women in police, and especially at the level of constabulary, is the highest of all the government jobs in the country, not to mention there are instances of women leaving the Indian Police Service – the top tier of a highly horizontally stratified police force – which is considered an elite and a prestigious vocation. This is obviously due to the discouraging and disincentivising atmosphere, peer pressures, and gendered issues.

Research conducted internationally and in the United States clearly illustrates that female police and enforcement officers utilize a different feminine policing style – relying less on physical force and more on communications skills – to control potentially violent scenarios or conflict situations, and which are therefore less likely to escalate into excessive force or uncontrolled situations. Consequentially, citizen complaints, public resentment or civil liabilities are substantially less likely to occur. According to the National Center for Women & Policing (a Division of the Feminist Majority Foundation), the under-representation of women at all levels in any progressive and modern police agency negatively impacts the culture and operational efficiency of law enforcement agencies and throughout that community or country in which it prevails.

Today, in India, crime against women is at an all-time high, and socially-destructive and exploitative practices like dowry, molestation, sexual assault, and coercion are unprecedented. Coincidentally, a recent survey by the G20 of the reputed legal service firm TrustLaw, a subsidiary of the Thomson Reuters Foundation, found that a combination of infanticide, child marriage, and slavery left India at the bottom of the ranking in terms of the places where women could or ought to stay. As a matter of fact India lagged behind even Saudi Arabia, where women are not allowed to drive and only gained the right to vote in 2011.

Given the many difficult challenges that India faces as a nation in the making and being an economic power on the threshold, the need to hire more women in its law enforcement and security provisioning has never been more imperative.

Anjana Sinha is Inspector General of Police in Andhra Pradesh, India. She is a security reform practitioner with over twenty years of field and management experience in India. She entered the federal police force in 1990. She was a CASI Fall 2012 Visiting Scholar. She can be reached at asinha9023@yahoo.co.in