For more in-depth discussion of these matter, read the author's essay "A More Indian Path to Prosperity? Hindu Nationalism and Development in the Mid-20th Century and Beyond," which will appear in Capitalism: A Journal of History and Economics in Winter 2022

"Why the BJP has Revived a Mythic Version of Deendayal Upadhyaya," Aditya Balasubramanian. Scroll.in, October 5, 2022

Deendayal Upadhyaya and Indian Political Economy: Memory, History, and the Inconveniences of the Present 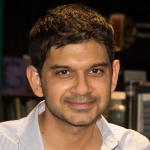 “Deendayal Upadhyaya has become the political brand equity for the Bharatiya Janata Party that Gandhi was for the Congress Party,” a prominent BJP member asserted in 2017. And indeed, at the close of yearlong celebrations of the birth centenary of Upadhyaya (1916-68), the erstwhile General Secretary (1952-68) of the BJP’s forerunner Bharatiya Jana Sangh, there was reason to believe this was the case. Since its return to power with a majority in India’s Lok Sabha in 2014, the BJP made concerted efforts to elevate Upadhyaya to the status of national icon. This included a major exhibition about his life at the Nehru Memorial Museum and Library, the temporary replacement of Nehru’s portrait at that library’s seminar room with one of Upadhyaya, and the renaming of Race Course Road as Lok Kalyan Marg (Public Welfare Road) after Upadhyaya’s term for the ideal motivation for action. In the domain of policy, the BJP-led government named a signature rural electrification scheme, the Deendayal Upadhyaya Gram Jyoti Yojana (Village Light Plan), after him in a nod to his developmental vision. And of course, Upadhyaya authored the BJP’s impenetrable philosophy of “integral humanism.”

Today, Upadhyaya enjoys a prominence never attained during his lifetime. In part, his relative obscurity has allowed the BJP to mould his memory to their liking, devoid of much substantive content. Significant dimensions of his life and thought have been ignored, which expose tensions in the Sangh Parivar, or groups affiliated to the BJP’s parent Rashtriya Swayamsevak Sangh (RSS).

Notably, Upadhyaya, a committed RSS worker, was the first to lay out the basics of an economic agenda for Hindu nationalism in two works published in 1958, The Two Plans: Promises, Performance, Prospects and Bharatiya Arthniti: Vikas ki Ek Disha. These were not technical discussions of policy. However, they demonstrate a considered reckoning with salient issues that are revealing of the ways in which Hindu nationalists sought to mainstream themselves in an era of their marginality. At the time, the Jana Sangh aimed to overcome the stigma of the RSS, which had been briefly banned after one of its former members assassinated Gandhi. Its base consisted mainly of urban traders in North India. The party thus sought to devise a program for national economic development that accommodated the interests of its support base and widened its appeal to other professional classes.

In contrast to the capital-intensive, centrally-planned economic program being pursued in the 1950s, Upadhyaya advanced the idea of a decentralized, labor-intensive industrialization. In fact, he suggested altogether abolishing the Planning Commission, the apex decision-making body for Indian economic policy. His alternative economy would focus on small industrial production and investment (chhote udyog and chhoti punji) and trade. In this way, it could raise the overall level of output while maintaining the primacy of the Jana Sangh base. Consistent with that focus, Upadhyaya suggested focusing transport investment toward developing inland waterways and roads. This would grease the wheels of domestic commerce and avoid clumping of the population in cities. According to Upadhyaya, urban migration for work uprooted families and led to a decline in values.

Upadhyaya sought to frame his alternative economic plan as part of a culturally nativist project. This led to both discursive and material choices. Bharatiya Arthniti was written in a Sanskritic Hindi. It is interspersed with quotations from Hindu texts like the Vedas. The book also appropriated the language of the nationalist movement like swadeshi (own-country), which connoted the boycott of foreign goods and indigenous production. However, it differed from the Gandhian vision because it was not against machinery per se. Rather, the idea was to use small industrial production to modernize and avoid the gigantism of the era, thereby appeasing the small trader base while contributing a holistic vision of development. The nativism also extended to an attitude that foreign trade must be regarded with scepticism and that both foreign aid and expertise from superpowers, so crucial to the Five Year Plans, compromised India’s sovereignty.

Unity as a Hindu society is a pillar of Hindu nationalism. This had implications for Upadhyaya’s take on various policies. It was from this idea that he argued that labor must not fragment society by turning to divisive class politics, but instead, pursue the development of an integrated whole society governed by dharma with its caste-based division. This emphasis on unity also led him to oppose land reform measures that would fragment holdings.

In hatching this scheme, Upadhyaya referenced two more well-known economic thinkers who had been inspired by the pre-WWI strategy of industrialization adopted by Japan and its idiom of fukoku kyohei (rich country, strong military). They point to an alternative genealogy of economic thought in India that has typically been connected exclusively to the Soviet Union, the United Kingdom, and the United States. In contrast to the heavy industrial, capital-goods led model of the Soviets, the early Japanese model focused on the mechanization of small industrial production without sidelining agriculture. Drawing on the early Japanese model, the Bombay monetary economist C.N. Vakil had theorized a wage-goods model of development as an alternative to a capital goods model and argued that the former should take priority and would set India upon a steadier path to development.  Upadhyaya’s own work cited Vakil on the importance of expanding the marketable surplus of wage goods and the rationale of the consumption multiplier. He drew his idea about the management of labor from Visvesvaraya, the Mysore engineer and father of Indian planning. Visvesvaraya had been impressed with the ability of the Japanese to discipline labor and believed that development at the district level should take place by forced work.

Upadhyaya’s attitude toward labor and antipathy toward imported goods have been self-consciously taken forward by two RSS-affiliated organizations: the Bharatiya Mazdoor Sangh (Indian Workers’ Organization, or BMS) and the Swadeshi Jagran Manch (Forum for the National Awakening of Economic Self-Sufficiency, or Manch). The BMS, founded in 1955, has grown into India’s largest labor union. An anti-communist union, it seeks to contain class conflict. And while the BMS embraced the usage of technology for small-scale production but campaigned to discard labor-displacing foreign machinery, it generally associated with larger factory enterprises. Its more direct link to Upadhyaya comes through founder Dattopant Thengadi, who adopted Integral Humanism as the BMS’ philosophy and authored two books on Upadhyaya.

Founded in 1991 by Thengadi and four associates in the aftermath of the liberalization of the Indian economy, the Manch aims to protect the interests of indigenous business from foreign competition. Apart from organizing boycotts of foreign goods and rallying against free trade, it has also opposed amendments to India’s intellectual property rights regime that would allow foreign producers monopoly rights on patented products, especially in agriculture. It is India’s keenest anti-foreign direct investment body.

More than a half century after Upadhyaya sought to create an economic platform for his Jana Sangh, the BJP campaigned on a very different platform of vikas (development) to supplement its ethnomajoritarian agenda in the 2014 elections. Commentators gravitated toward this campaign for its promise of attracting foreign business investments to India and modernizing the economy. Sectors like retail are now more friendly to foreign investment. Service-sector-led jobless growth and increasingly centralized economic policymaking have defined the last eight years. This has created tension within the Sangh Parivar, which has constituencies loyal to the vision of Upadhyaya with its focus on home production, decentralization, and labor intensity. Perhaps this is why a more malleable, mythic Upadhyaya has been revived by the BJP. The historical Upadhyaya would be a far more difficult one to follow. But as the unemployed working population grow in ranks, state governments see the center as increasingly draining away resources, and as foreign investments continue to make inroads, one can expect voices to join those of the BMS and the Manch.

Aditya Balasubramanian is a Lecturer in Economic History at the Australian National University. His book, Towards A Free Economy: Swatantra and Opposition Politics in Democratic India, is forthcoming from Princeton University Press in 2023. Twitter: @Aditya_Balasub.