"Debating the Nuclear Legacy of India and One of Its Great Cold War Strategists," Yogesh Joshi. War on the Rocks, March 27, 2017 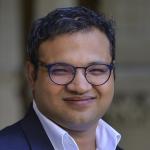 In early November, a Russian news website claimed that the Indian Navy allowed a US technical team to inspect the Russian Akula-Class nuclear submarine loaned to India in 2012. Although the report turned out to be false, the issue raised eyebrows in strategic circles, for two reasons. First, it brought into focus Indo-Russian cooperation in the domain of nuclear submarines. India is the only country in the world to have operated a nuclear submarine on loan from a nuclear-weapon state and Russia is the only such state to have leased one. The history of their cooperation on nuclear submarines has, however, been shrouded in secrecy. Second, it highlighted potential strains in Indo-Russian defense ties against the backdrop of New Delhi’s growing strategic closeness with Washington. Even when Russia remains India’s largest defense supplier, New Delhi has increasingly looked toward the US for top-of-the-line defense equipment including attack helicopters, artillery guns, and advanced transport aircrafts. More worrying for Moscow is the recent emphasis on technical cooperation between the two sides in joint production of defense equipment. In the current environment of distrust between the US and Russia since the Ukraine crisis, Moscow is increasingly wary of US-India defense cooperation lest it compromise existing Russian defense technology in Indian hands.

In October 1986, the Soviet Politburo confirmed the lease of a submarine. However, there were voices of resistance. An internal memorandum circulated by some politburo members in November 1986 pleaded with President Gorbachev to cancel the lease on grounds that it would unleash a nuclear arms race in the Indian Ocean, create a perception of Soviet compromise with the nuclear non-proliferation treaty, and harm the prospects of creating a zone of peace in the Indian Ocean. The memo also expressed fears that “in the process of the use of the nuclear submarine a succession of technical data about the boat’s systems, and also partially about the external parameters of the benchmark (bazovoy) of the nuclear power plant for our nuclear submarines will fall into the American hands.”

Gorbachev did not heed these voices and the transfer was officially completed in December 1987. However, a special service group (SSG) of the Soviet Navy accompanied the Soviet nuclear submarine K-43—rechristened INS Chakra by the Indian Navy—when it sailed for Visakhapatnam from Vladivostok in January 1988. The SSG’s mandate was not only to help with the smooth operations of the boat but also to ensure that no technical parameters were leaked during the period of the lease. That the Visakhapatnam naval base was completely out of bounds to Western navies also helped assuage Soviet fears. In fact, during the Cold War, a division existed between the Eastern and the Western command of the Indian Navy, with the Eastern Command primarily dealing with equipment supplied by Moscow. Moreover, the Indian Navy maintained strict controls over access to the boat even for its own senior commanders.

If Moscow feared its defense equipment being compromised in Indian hands during the Cold War, current circumstances accentuate these concerns. From being an exclusive preserve of the Russian defense industry, the Indian Navy is increasingly looking forward to American hardware. For example, Russian Tu-142 maritime reconnaissance aircrafts have been replaced by Boeing’s P-8 I Poseidon aircrafts of the same type, and India is seeking US technology for its new aircraft carriers. India conducts its most high-profile naval exercises—the Malabar series—with the US Navy, with an emphasis on joint operations. The sea change in India-US naval relations is evident in the fact that in 2015, US Defense Secretary Ashton Carter visited the Visakhapatnam naval base, which was considered a Soviet outpost in the Indian Ocean for much of the Cold War.

Yet, it would be erroneous to assume that India will give short shrift to Russian concerns. On the contrary, India acquiesced in a Russian naval group accompanying the Akula-class nuclear submarine loaned to India in 2012 and the same will be true when India next borrows a boat, negotiations for which are currently underway. Indian naval strategists appreciate the strategic utility of Russian cooperation, even when these boats are largely meant for training and come with restrictions on their use for offensive purposes. But most importantly, Russia’s technological assistance to India’s indigenous nuclear submarine program has been immense. India’s first nuclear submarine, the INS Arihant, would have been a pipedream without Moscow’s assistance, which remains critical for the next generation of India’s nuclear submarines as well.

Given this history of cooperation and India’s need for continued Russian assistance, it is hard to imagine that New Delhi would shoot itself in the foot by revealing Russian secrets to its American counterparts. In fact, the reluctance among the Indian defense services (including the Indian Navy) on signing the Communication and Information Security Memorandum of Agreement (CISMOA) with the US partly emanates from such concerns. Moreover, it is impossible for the Indian Navy to do so without prior consultations with Moscow as the latter’s naval personnel are always on-board its leased nuclear submarines. Finally, even though some Indian strategists now argue for US technical cooperation in naval nuclear propulsion, New Delhi knows that it will be difficult for the US to overcome its reluctance to share military nuclear technology with India. For the sake of some future possibility of cooperation with the US, India cannot afford to abandon its most important defense partner.

Yogesh Joshi is a Nuclear Security Post-Doctoral Fellow at the Center for International Security and Cooperation (CISAC), Stanford University. He is currently finishing a manuscript on India’s nuclear submarine programme.