"Through the Lens of Mewat, Darkly," Pretti Mann. The Hindu: Business Line. September 9, 2014

Political Mirage: Through the Lens of Mewat 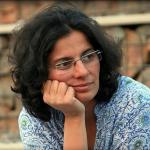 If we consider recent elections in India, one could say that the seeds for alternative politics have been sown. But why, despite so much support in the media and its spectacular debut in Delhi, did the Aam Aadmi Party (AAP) secure only four Lok Sabha seats?  An understanding of the sociology of the elections, through the lens of Mewat, attempts to explore one aspect of this. While specific to Mewat, these observations are not necessarily unique to the region. These findings could be extrapolated to other geographical microcosms, especially in rural India, and still be equally relevant.

The district of Mewat falls under the Gurgaon parliamentary constituency. According to the 2011 census, Mewat District has a population of 1,089,406. About 75 percent of the population in the region is Meo, or Jat Muslim, and nearly 90 percent is rural. At its farthest point, Mewat is no more than 150 kilometers from Delhi and yet, it lingers at the bottom of the pile in terms of development indicators and infrastructure. The locals are visibly weary of the traditional political establishment and its empty promises. On the surface, therefore, Mewat appears to be fertile ground – one where corruption is rampant and developmental indicators are dismal – for new political entrants such as the AAP. However, a study of election behavior in Mewat reveals quite the contrary.

Individuality and decision-making freedom in casting one’s vote, the way we understand it for most of urban India – especially metropolitan India – does not exist in Mewat. For example, Mewati women mostly vote for the party their men tell them to vote for. While illegal, it is also common for the men to cast the women’s votes. Similarly, an average person in Mewat is attached to a thonda, or middleman, whose dictat he toes. Each thonda represents a certain vote bank: depending on his clout, he could influence more than two thousand votes. The web of associations between the thondas and the locals has created a fine network of political ties in the region. Due to this, there is hardly a free floating, independent or disassociated vote in Mewat.

In contrast to the AAP, older parties, who have been in the region longer, therefore, usually do not invest much effort in terms of directly campaigning to the voter. In fact, they target their campaigns and efforts towards the thondas, who, as the elections draw closer, are easy to spot, huddled in discussions and calculations in the several chai-hookah stalls that dot Mewat. When in distress, locals approach their respective thondas, who have access to elected representatives. In return for the locals’ votes the thonda assures them a political safety net and potential immunity from arbitrary state action. Further up the chain, in exchange for an assured vote bank, thondas get personal access to a political party’s high command, who oblige with favors in cash or kind. In a nutshell, people in Mewat are tied in mutual relations of obligations and loyalties.

People in Mewat feel that they constantly live on the edge. The locals sense a need to be politically connected and they do this by owing allegiance to thondas. Although good governance, clean politics, real development – AAP election promises – are acknowledged as good ideals, the Meos are preoccupied with ensuring a secure existence in the immediate future. And when they speak of a secure existence, they do not necessarily mean employment, irrigation facilities, drinking water, roads, schools, health care, or other infrastructure; they mean immunity from the police or the state should they ever be in trouble. A party like the AAP, which sought to bypass the thonda culture and connect directly with voters, therefore, struggled to find a foothold in Mewat. Locals think of the AAP as a party with the right ideology and well-meaning members, but not quite ready to take control and provide a credible alternative service delivery mechanism due to the decrepit nature of existing state structures in the district. For now, the Mewatis still rely on the traditional mechanics of the thonda system to get access to benefits.

Thondagiri – the business of the thondas – continues to thrive and grow from strength-to-strength because it is directly proportional to and representative of the extent of poor governance and rampant corruption in the region. Taking advantage of the fears, insecurities, and anxieties of the locals who navigate this lack of order, corruption and nepotism – on a regular basis – through their connections is what keeps this machinery ticking. This is a vicious cycle, as those who thrive off it are not interested in whether or not democratic institutions, structure, and order get restored. While the lack of good governance breeds the cult of the thondas, the locals are too insecure to break old social habits and vote for alternatives for fear that they might become politically orphaned. Thondagiri is attractive, now even to the younger lot, because of the good money one can potentially make.

This past election was unique for Mewat. The youth, and a good number of locals, including women, found the AAP’s ideology and approach appealing. What the AAP might label successful campaign rallies is perhaps what also cost them support in Mewat by bizarre logic. By coming out to attend AAP rallies and road shows in huge numbers, locals unknowingly exposed their own new inclinations. This immediately spurred traditional networks into action and the thondas relied on all manner of tactics to keep support for the AAP to a minimum. The locals were reigned in, and those sympathetic to the new party were now under even greater pressure to show allegiance to the old order. The young AAP had little experience in addressing the negative consequences of their rallies in Mewat.

The thondas are skilled psephologists in their own right. Based on homegrown polls and careful calculations, the political parties negotiate pre-election deals over their respective vote shares.  On polling day, it’s this prior consensus the thondas execute. Anyone who interferes or tries offsetting this plan is drastically taken care of. Leaving nothing to chance, the democratic system is thus subverted in Mewat. Urban voters who are used to some semblance of democracy, theoretical or otherwise, are appalled when news of rigging, booth-capturing and illegal voting trickle in from places such as Mewat. However, for now, the cliché “might is right” continues to hold in the region.

Mewat serves as a reminder of the immense gap between the real and the imagined worlds of Indian democracy. What happens in Mewat – and other parts of India – is a case of the tail wagging the dog. It is a popular saying that “Mewat can make or break an election.” An apt conclusion to this account of the recent parliamentary elections in Mewat would be to acknowledge the old and wise Mewati who, while cautioning the fate of the AAP said to me in an interview, “Yeh dehaat ha mammal hai aur dehaat aur shehar ke chunaav main bahut farak hota hai,” meaning “This is the countryside, and elections here are very different from the city.”

Preeti Mann is a social anthropologist at Ambedkar University, Delhi.