"From Ray to Rituparno: A Long History of Politics in Bengali Cinema," Nilosree Biswas. The Indian Express, June 20, 2021

"Ganashatru-The Enemy of the People," Nilosree Biswas. National Herald, May 2, 2021 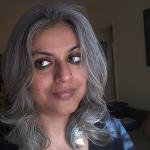 The genesis of Hindi cinema occurred in homegrown entertainment forms like yatra, mujra, and tamasha. Consequently, whatever was produced included sizeable chunks of theatrical elements and routine songs and dances. Even in films that claimed to be “socials”—1941’s Behen (Sister), 1943’s Paraya Dhan (Other’s Treasure), or 1945’s Bachpan (Childhood)—melodrama was more of the sentiment. At this time, as India was fighting for its independence, battered by oppressive colonial rule and its inherent social divides, these gaps became subject matter for a handful of significant, conscious Hindi cinema. 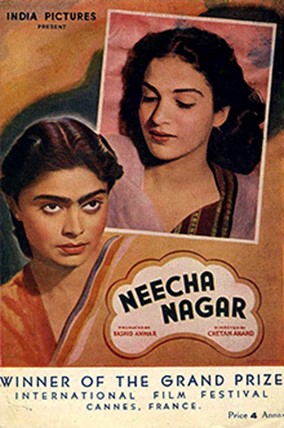 Over the next few years, Indian films portrayed hopes of a free nation. Screenplays were centered around urban males pursuing higher studies abroad or honest and uncompromising young men from modest backgrounds ready to dream big and take on life. Andaz (Style), Jeet (The Victory), both 1949 releases, Pardes (The Foreign Land) in 1950, Humlog (We the People), Nau Jawan (New Generation), and Saaza (Punishment) in 1951, all shared similar sentiments. However, these films did not address and infuse social gaps in their narratives.

Taking Baby Steps: Toward Themes of Social Justice in Hindi Cinema
By the early 1950s, India was battling its partition woes, poverty, and rising unemployment, resulting in onscreen characters who were no longer charmers, but vulnerable and wronged by society. Some of these vulnerable characters and the social deprivations they combated are seen in films such as Footpath (Sidewalk), Sujata (The Born Beautiful), Deewar (The Wall), and Gaman (The Departure). 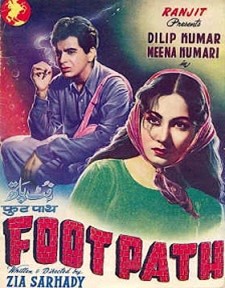 Footpath (Sidewalk)
Zia Sarhady’s Footpath (Sidewalk), released in 1953, opens with a soliloquy by the protagonist Noshu. In reaction to a hunger death in the city, he states “I am astonished how people even get money for buying poison when they don’t have a dime for a handful of grains!” Centered around Noshu, a journalist with a daily newspaper called Dharti (The Earth), Footpath is about a hero compelled to take up black marketing. In his sweeping journey of survival, Noshu loses his elder brother Bani, who dies with no access to medical help, as black marketers had hoarded medicines in a lure for more profit. At the end, Noshu surrenders to the police, makes confessions, and is in custody, while his girlfriend Mala awaits his return.

Noshu is a turnaround on the portrayal of a prototype hero. However, the audience at the time was not ready for a character who seemed unabashed about how his life had turned out. This unreadiness reflected in filmmakers’ unwillingness to take up major historical discriminations, such as the vile caste system, as the central themes in their movies.

But there were exceptions. 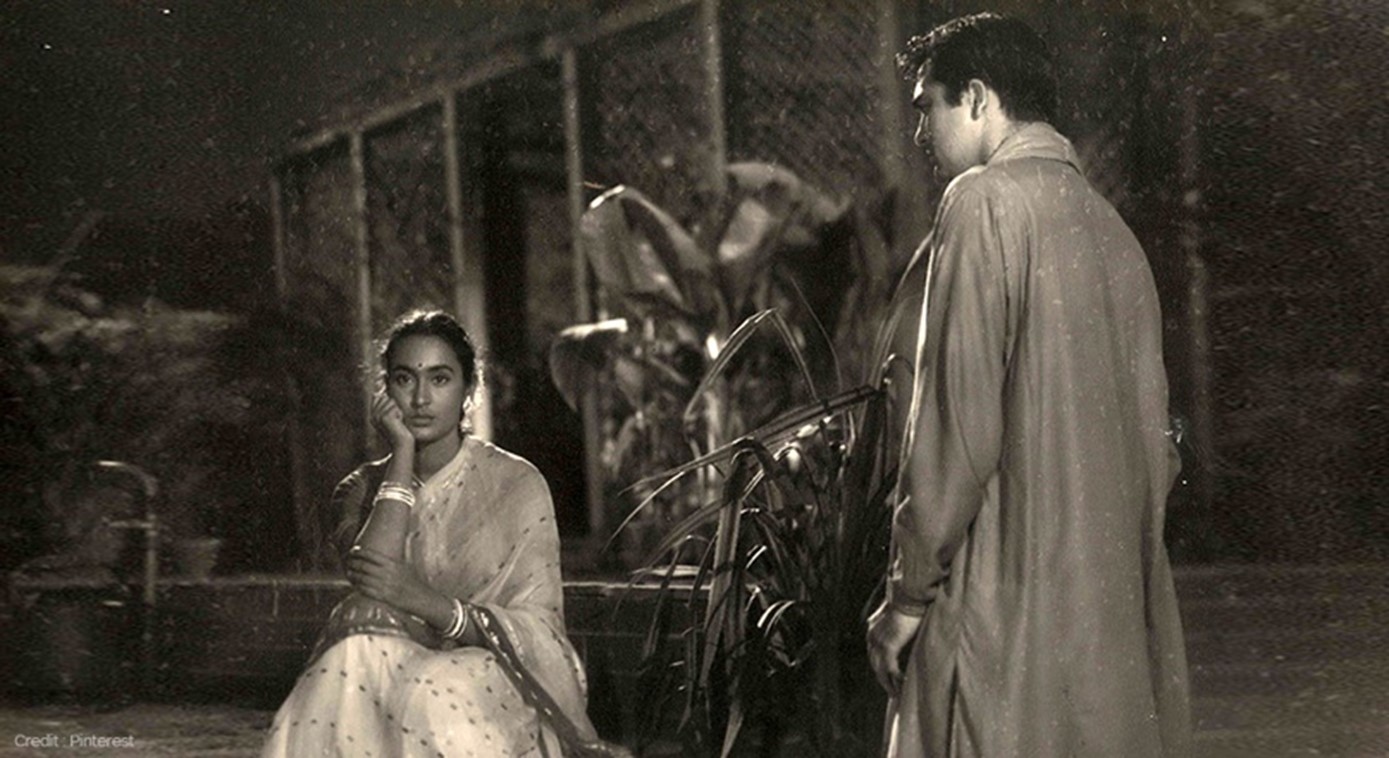 Scene from Sujata (1959): Sujata in a contemplative mood while her fiancé tries to initiate a conversation.

Sujata (The Born Beautiful)
Earlier attempts to depict untouchability and caste issues, such as in 1935’s Dharamatma (Holy Soul) or 1936’s Achyut Kanya (Untouchable Maiden), can be referred to as dramatic spins rather than any comment on social justice. In comparison, Sujata (The Born Beautiful) was a groundbreaker with a fresh cinematic treatment. Made in 1959, it’s an emotively-dealt family drama revolving around the identity crisis of a young woman born to parents of the lowest caste and raised by an upper caste Brahmin couple.

The story is told from Sujata’s (the Dalit protagonist’s) point of view and the plot partly convenes towards realism. Another powerful departure is the portrayal of Sujata’s mother Charu—flawed, torn between her motherly affection and oppressive belief systems, and fearing social ostracism.

Charu is depicted as reluctant to accept Sujata as her daughter, unlike Rama who is born to her. The script propels Charu’s dilemma forward until both girls come of age and Sujata finds a love interest in a Brahmin man, who happens also to be a Gandhian. By making Sujata’s fiancé a committed Gandhian, director Bimal Roy elevates the story to an idealistic realm. The story ends on the same note, with Sujata getting married to this Brahmin man of her choice. For a film released in India in the last year of 1950s, addressing the subject subtly and at a more character level was perhaps the best cinematic handling that Roy and screenwriter Nabendu Ghosh could manage. However, directorial dealings of the same subject would later become more driven with the emergence of New Wave Cinema like Ankur (The Seedling), Manthan (Churning), and Damul (Bonded Until Death).

Counting on Social Justice
Hindi films of the 1970s were all about scarcity: a war, prolong student movements, popular unrests, unabated inflation, and mass unemployment. Three decades into independence, many lived on the edge, desperate and seething in anger. These sentiments simmered into the characterization of an angry young man; an aggressive, emboldened hero featured in 1975’s Deewar (The Wall).

Deewar was yet another category of movie that pushed the line of mainstream cinema, targeting a wider audience, treading a path of broad spectrum storytelling. It was categorized as “mainstream cinema with a difference.” One of India’s most iconic films, Deewar completely redefined the “hero” who was far more aggressive than his earlier generations of leads. In a nutshell, Deewar is about Vijay, the hero who is wronged by his trade unionist father’s choices and witnesses his mother’s struggles as a migrant daily laborer toiling in Bombay’s housing sector. As he grows up to be an angry young man, he unapologetically catapults himself to be a don, with immense disgust for the anti-poor society around him. While Vijay chooses smuggling to reclaim the lost dream of a dignified existence, his younger brother Ravi becomes a diligent police officer, favoring lawfulness.

It was actually 1973’s Zanjeer (Shackles) that set the tone for the angry young man characterization. This paved the way for Deewar’s inclusion of socially relevant elements such as workers’ resistance against capitalists, lack of social security, attempts to erase class divides by any means, and the sanctity of motherhood. 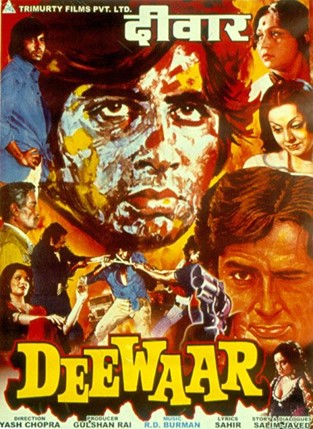 At first glance, Deewar is a tale of anxious relationships. Writers Salim-Javed and director Yash Chopra play around with this strain depicting the doting-turned-warring brothers and their gradual falling out. The fallout is based on moral grounds of supposed “good” and “bad” with Vijay as the fallen and Ravi as the redeemer. The trauma of a degrading life abounds with hunger and a lack of resources—the anger in which Vijay fumes while hoping to subvert his world is an ongoing metaphor for tens of thousands in India. As a result, Deewar is as relatable today as it was then.

Deewar kicked off a trend of similar films featuring a wronged man and his story of justice. Ironically, many of them were higher on mindless violence than they were on storytelling or any deep analysis. However, the directors of New Wave Cinema toyed with more complicated subjects, giving them a nuanced treatment and omitting superficiality. One such distinct film was Muzaffar Ali’s Gaman (The Departure). 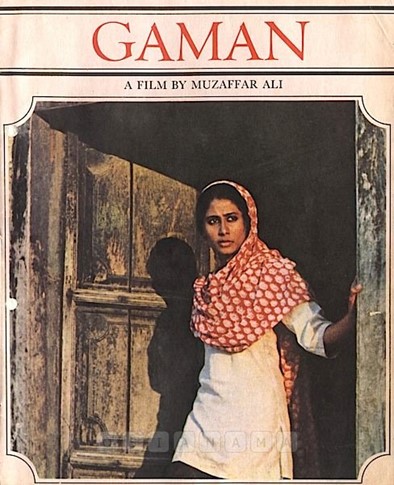 Released in 1978, Gaman is about Ghulam Hassan and Lalulal Tiwari, two friends who hail from a remote village in Uttar Pradesh. Lalulal persuades Ghulam to try his luck as a taxi driver in Bombay. Ghulam reaches the city, leaving his ailing mother in the care of his wife. Although he gets rid of his hapless village life, he is unable to make ends meet in Bombay. The film ends with Ghulam getting sucked into his city-based existence, unable to return.

Gaman contextualizes the emergence of the urban working class and their relentless struggles. The plot, which initially seems like the simple story of a farmer in search of the good life, soon becomes a complex narrative tackling the bigger question of poverty elevation, rural-urban migration, and less-discussed urban loneliness. The film is a humane take on a landless farmer’s transformation into an urban laborer, the collapsing Indian economy, the big-city dream, and the poor’s idea of an elusive sustainable city life.

In the decades since the release of these films, the popularity of hard-hitting, violent Hindi cinema, devoid of much realism, grew manifold. Concurrently, labor movements have been crushed, small farmers have lost their land holdings, and gender violence and discriminations have been on the rise. Stifling social repression offscreen has only heightened bullish violence onscreen. By the 1990s, mainstream Hindi cinema only churned out films where heroes single-handedly delivered justice by way of bloodbath, reaffirming the breakdown of India’s social fabric.

With 2012’s releases of Anurag Kashyap (Gangs of Wasseypur), Vasan Bala (Peddlers), and Asim Ahluwalia (Miss Lovely), Hindi cinema’s storytelling took some gritty turns. The following years saw Rajit Kapoor’s Ankhon Dekhi (Through My Own Eyes) in 2014 and Neeraj Ghaywan’s Masaan (The Crematorium) in 2015—movies that raised incisive questions about India’s complex caste system and rampant corruption. Netflix soon brought forth content infused with spurts of social justice, such as the 2018 premiere of Sacred Games, India’s first Netflix original series. Web series like 2019’s Delhi Crime, based on rising violence against women, emerged from this notion, breaking away from the nomenclature of New Wave Cinema’s 80s and 90s films. As entertainment trends continue to move toward streaming services, it would seem that present day India is no longer interested in big screen films rooted in social justice, but are content watching the justice-seekers from the convenience of their smartphones.

Nilosree Biswas is an independent filmmaker and author, trained in Comparative Literature at Jadavpur University, Kolkata and in cinema at Film and Television Institute of India (FTII). Her forthcoming book, Banaras (Niyogi Books), will be released in summer 2021.