Investigating Discrimination Against Migrants in Urban India: The Electoral Connection 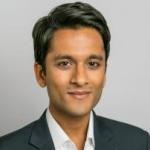 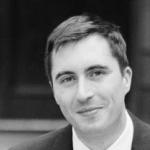 India’s large population of internal migrants experienced punishing hardships during the COVID-19 lockdown, as many struggled to return home and access essential services. The country’s rapid urbanization has involved the mass relocation of job aspirants from the countryside to cities. Few doubt the significance of this demographic shift for India’s economic growth. Yet the early days of the pandemic brought into focus the short shrift too often paid to movers.

Nor can this be considered a one-off event. The 2014 Bezbaruah report spotlighted the hostile reception given to Northeastern migrants in destination cities nationwide. Recently, governments in Madhya Pradesh, Andhra Pradesh, and many other states have introduced locals-only job quotas to safeguard employment for natives and deter newcomers. The anti-migrant platforms of India’s “sons of the soil” parties were detailed by Mary Katzenstein and Myron Weiner as early as the 1970s.

From the point of view of India’s federal compact, these are worrying signs. They raise several important questions, which motivate our ongoing research agenda. How severe and systematic is the discrimination that India’s internal migrants face? Which classes of migrants find themselves marginalized? What spurs migrants’ unequal treatment? And what policy tools can be enlisted to improve the situation?

Some Theoretical Priors
Our initial goal was to understand the shapers of public opinion over internal migration. Prior social scientific work points to two main sets of explanations for why locals are averse to new arrivals. The first—xenophobia—highlights the role of negative affect toward outsiders. On this view, locals seek to protect the prevailing ethnic makeup of the urban society they inhabit; influxes of migrants carry the risk of ethno-cultural “dilution.” Meanwhile, a second set of accounts stresses economic anxieties. Unemployment in India remains high. It is plausible that jobseekers entering labor markets from other regions will reduce local wages or displace locals from employment altogether. Migrants might also consume over-stretched services, potentially without contributing much in taxes.

As we shall see, these factors matter, but they do not tell the full story. Internal migrants differ from international immigrants in a key respect, namely, their constitutionally enshrined right to vote wherever they move. In India’s vibrant and competitive democracy, the potential for migrants to serve as vote banks can fundamentally modify the incentives for citizens and political elites to work for or against migrants’ assimilation.

Marshalling the Evidence: What Do Locals Think About Different Migrant Groups?
Our first study zoomed in on Mumbai—arguably an epicenter of nativist politics in India and the home base of the Shiv Sena and its offshoot, the Maharashtra Navnirman Sena. We fielded a survey experiment on a representative sample of the city’s population to elicit the determinants of Mumbaikars’ attitudes toward recent migrants coming to the city. A vignette described a hypothetical migrant who was said to be highly skilled or not highly skilled, and who bore either a distinctively Hindu or distinctively Muslim name. (At least since the post-Babri riots of the early 1990s, religion has been a salient identity cleavage in Mumbai.) We then posed questions to respondents regarding their willingness to have such a migrant in the city and whether they supported allowing the migrant to vote there.

The study’s results validate arguments about the economic basis for anti-migrant bias. Highly skilled migrants were much preferred to low-skilled ones overall. Strikingly, though, dislike of low-skilled migrants was concentrated among low-skilled respondents: those whose economic standing in the labor market is most precarious and who are most reliant on government services. Rational material concerns therefore appear to contribute to the opprobrium shown toward migrants. 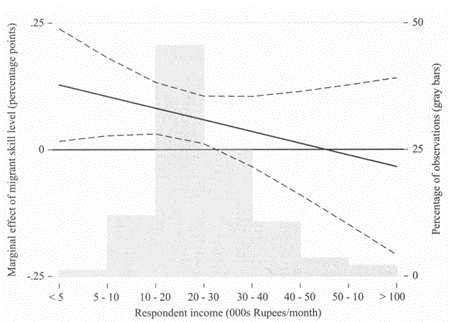 The findings on ethnicity were asymmetric. Majority-community Hindu respondents demonstrated no co-ethnic favoritism: they were indifferent to the religious affiliation of prospective migrants. Minority-community Muslim respondents, on the other hand, were strongly partial toward co-ethnics. Moreover, long-term Muslim residents of Mumbai only heeded migrants’ skill level when evaluating Hindu migrants; Muslim migrants’ skill profile was irrelevant to them.

Digging into the data, we find that considerations of group electoral strength help explain the observed majority-minority divergence in attitudes. The co-ethnic bias is much greater among politically active Muslim respondents. In addition, Muslim respondents are especially disposed to push for the full electoral incorporation of Muslim (rather than Hindu) migrants. Given this minority’s vulnerable position in the city—where they find themselves under-represented in almost every domain of administration and governance—it appears that co-ethnic migration is seen a device for achieving “safety in numbers.”

Do Politicians Display Anti-Migrant Bias Too?
Our Mumbai project casts light on how native populations react to new waves of migrants. Yet the molding of public opinion is only one link in a causal sequence generating migrant exclusion. At least equally necessary are the attitudes and behaviors of political elites. Consequently, we wanted to know whether those at the front lines of supplying services to urban citizens dole out scarce resources to long-term residents rather than migrants. There is powerful logic to indicate they might.

Politicians, like natives, could themselves harbor prejudice toward outsiders. They may also channel the socio-economic preferences of long-term residents. Once more, though, political strategy enters into the calculation. We presume that politicians weigh the costs of assisting citizen-requesters against their beliefs that this aid will translate into votes and ultimately re-election—their primary objective. Since a large chunk of internal migration is seasonal, and since re-registering to vote in destination cities can be cumbersome, politicians may come to suspect that migrants participate in city elections at lower rates than long-term residents. If correct, migrants could find themselves at the short end of the stick when petitioning local politicians.

We launched an audit experiment to evaluate these claims. We wrote and delivered 2,933 letters to municipal councilors in 28 cities. Each letter asked for a type of constituency service commonly offered by councilors: for example, help in fixing a streetlamp or obtaining an income certificate. The letters conveyed several bits of identifying information about the (fictitious) citizen making the request. Most importantly, half of the them claimed to be from city “natives” who had lived in the city all their lives, whereas others claimed to be from someone who had “recently migrated to this city from a different Indian state.” The letter concluded by giving a local phone number and asking for a callback.

Putative migrant requesters turned out to be significantly less likely to get callbacks from councilors than putative local requesters—a 24 percent difference. Migrants’ sidelining, it seems, is a systematic phenomenon and an underappreciated feature of India’s political landscape. Just as noteworthy, however, is that the pattern of results did not back the case that politicians held personal animus against migrants, nor that they were echoing the nativist preferences of locals in how they acted.

Rather, the evidence falls squarely on an electoral explanation. In a follow-up audit, this time conducted via SMS text messages, we varied not only requesters’ native/migrant status but their political attributes too—above all, whether they claimed to be registered to vote locally. Mentioning this trait had a big impact on responsiveness. “Registered” migrants were not only more likely to hear back from councilors than “unregistered migrants,” they were about equally as likely to get a response as “registered” locals. In other words, clarifying registration status caused the anti-migrant penalty to disappear.

For a final check on whether politicians’ beliefs about low participation rates drive their disregard for migrants, we administered a short survey on a subset of the politicians themselves. In it, we described a hypothetical citizen who was said to be either a local or a migrant, and simply asked politicians how likely they thought it was that such a citizen would be registered to vote in his or her ward. On average, politicians assigned a long-term local were 46 percentage points more likely than those assigned a migrant to state that such an individual would be enrolled locally, further substantiating the case for an electoral connection. 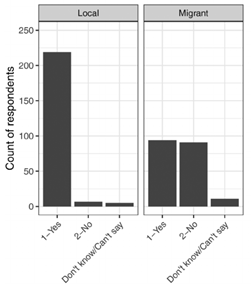 Councilors’ beliefs about whether different types of urban citizens are registered to vote in the city.

What’s Next?
Some clear policy implications follow. Migrants and those advocating for them need to be alert to the fact that this group’s reputation for low turnout can harm their interests. Registering migrants to vote en masse in city elections and publicizing that such campaigns have happened could go a long way toward lifting migrant welfare. More can be done, too, to streamline voter registration procedures to make them less onerous for those who migrate. There also needs to be renewed focus on the employment situation and the deep insecurity felt by many locals—particularly those who are not highly skilled—in migrant-receiver cities. The climate for migrants may not improve absent a major uptick in the job prospects for cities’ long-term residents.

It is important to note that our findings do not exist in a vacuum. They tie to path-breaking research being done on urban informality (e.g., the work of Adam Auerbach and Tariq Thachil), citizen claims-making on the state (Jennifer Bussell and Gabrielle Kruks-Wisener), and ways to boost electoral inclusion in India and beyond. Future work should seek to add to our knowledge of how democracy and mobility intersect.

Nikhar Gaikwad is an Assistant Professor of Political Science at Columbia University.

Gareth Nellis is an Assistant Professor of Political Science at the University of California, San Diego.