"The Monsoon, and Our Sinking Cities," Debjani Bhattacharyya. The Hindu: Business Line, October 7, 2020

Urbanism at Water’s Edge: The Fluid Histories of Property in Calcutta - CASI Book Talk (Video), May 21, 2020 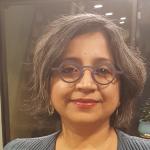 On May 20, 2020, in what is becoming a semi-annual environmental ritual, a super-cyclone pummeled through the Bengal delta, breaching embankments in the Sundarbans and submerging large swathes of Kolkata. The winds and the tides that accompany these super-cyclones have a curious way of foregrounding how deeply the concrete city is embedded in the deltaic ecology and the region’s hydrology. The waters that bubbled up and gushed through the streets of Kolkata blurred the human-drawn administrative borders that separate the urban municipality of Kolkata from the mangrove forests of the estuarine Sundarbans. Our disciplinary silos—urban planning, forestry, and oceanography—map onto these administrative demarcations of city, river, irrigation, and forest departments. Yet, as Kolkata expands through gated concrete communities of luxury apartments on its eastern fringes, the warming waters of the Bay of Bengal connect the urban hydrosphere more intimately with the creeks and the forests of this silty littoral.

Following cyclone Amphan, some of us woke up to images of half-submerged airplanes in the hangers of a flooded Kolkata airport, a facility which sits atop erstwhile wetlands. We saw water gushing through the streets, some swelling with books from Asia’s second largest book market in North Kolkata’s College Street. For a brief moment, the delta reminded the city of its forgotten watery origins. In the meantime, increased pollution and carbon emissions are destabilizing the monsoon, compelling the Indian Meteorological Department in January 2020 to ultimately revise its monsoon onset date. It is thus an imperative that we investigate the past and future of Indian cities from the vantage point of the warming waters of the Indian Ocean and the tropical monsoon system.

This is not just Kolkata’s story. In the past few weeks, heavy rainfall in the drier northwestern parts of India have meant that cities like Jaipur have seen heavy flooding, while streets in Gurugram have remained submerged in water. Meanwhile, the encroachment of the Arabian Sea into Mumbai is the new normal. In Chennai, the water crisis has manifested its Janus face. The flooding of 2015 revealed the consequences of filling in the water bodies to make way for real estate. If the city was overwhelmed with too much water in 2015, by 2019 Chennai had reached Day Zero—the point when the city’s water reservoirs ran dry. Addressing the root of Chennai’s water crisis, activist and scholar Nityanand Jayaraman pointed out that it sprung from the city’s broken relationship with its water. One may say the same for both Kolkata and Mumbai, where the crisis of rising waters from the rivers, seas, marshes, and sewage seeping into the streets and homes are a product of legal decisions taken and planning decisions left unimplemented over the course of the last century and a half. Turning to the history of Kolkata’s urbanization may provide cautionary answers to how to make water—not just piped infrastructures, but those that are in the clouds above, in the subsoil beneath, in the lakes, the small waterbodies and bogs that surround our cities—central in understanding the urban condition.

Much attention has been paid to the piped water infrastructures in Indian cities—especially since access to clean water remains both fraught and fractured along caste-class lines. However, the other waters found in bogs, marshes, ditches, and clouds have receded from mainstream discussions. Yet, historically, such waters played a central role in imagining a particular future of colonial cities in the nineteenth century in the form of miasma and pestilence. For instance, in the case of colonial Kolkata, an epidemiological perspective which viewed “climate” as a source of disease went about propagating the draining of swamps, creeks, canals, and inlets in the city from the early nineteenth century onward. This culminated in the famous 1836 report by Ranald Martin, Notes on the Medical Topography of Calcutta, a document replete with fever maps and plans for draining the city.

This report remains ostensibly a piece of bureaucratic imagination of what an ideal city should be and hardly any of its recommendations were implemented. However, as the fate of any bureaucratic document goes, parts of this report were quoted, paraphrased, referred to, and plagiarized in the multiple colonial administrative writings debating the future of Kolkata, a city whose streets regularly turned into sheets of water during monsoons. That is not to say that large parts of the city were not drained. The swamps were turned into profit-generating properties and infrastructures under the aegis of various landholding bodies, with extensive swamp-reclamation in and around Kolkata from the early decades of the twentieth century. The fear of miasmatic fevers was hardly the driving force here. The amphibious spaces such as long stretches of mudflats deposited by the meandering River Hooghly on Kolkata’s western banks in the early decades of the nineteenth century, or the salt marshes in the eastern fringes, were transformed to solid property in the service of the lucrative real-estate market of an expanding city. A particular form of profit-oriented property thinking drove the transformation of this oozy, muddy, land-waterscape of Kolkata into alienable plots which could easily circulate in the expanding land market.

Early legal experiments with acquiring private land for public purposes from the 1820s were carried out in salt marshes and alluvial flats deposited by the meandering Hooghly river. These legal takeovers of marshes and swamps for the public purposes of building roads, such as the Strand Road—a main connecting thoroughfare built on alluvial flats—were expanded under new economic calculations of profit that saw the smaller canals (khals) and spill channels (nalas) that crisscrossed the city under private or communal ownership pass onto the East India Company initially and, by the later-half of the nineteenth century, to the Crown government in Kolkata.

By the twentieth century, much of the multivalent uses of the ponds, marshes, and canals were forgotten and swamps emerged as a limit to urbanization in Kolkata, which much like Rangoon and Mumbai, were marked by active working-class politics and a severe housing crisis. Raging municipal debates in the 1920s confirmed that the good landlord was one who converted swamps into housing—thus giving birth to the land developer who emerged as a key political figure in urban politics. Indeed, pitting profits made from housing development against “wasted” swamps gave impetus to the expansive draining of the salt marshes in the 1950s to create Kolkata’s wealthy neighborhood of Salt Lake. Such development continues unabated as the wetlands on the eastern fringes of Kolkata are turned into speculative real estate propped upon liquid land (literally jala-jami). Twentieth-century Bombay ran a similar course, where land-reclamation as a mode of urbanization turned the sea into housing estate reaping unimaginable profits.

It is no wonder that contemporary Kolkata’s regular flooding, or the projected submergence of parts of Mumbai by 2050, was a century in the making. It would be easy to say that they were mere design failures, but they were not. Instead, they were particular modes of seeing swamps as economic wastelands that needed to be turned into profitable housing, erasing the creeks and crannies through which water circulated. To echo Jayaraman, each city has a broken relationship with water—be it water pouring down from the sky, seeping up from the ground or creeping in from the seas and bays that surround the city. The question is whether or not we will make the hydrosphere part of our discussions of the urban condition, and investigate where the lines of water flows have been erased, halted, and forced to disappear. Will we be capable of seeing water in our pipes, subsoil, reservoir, seas, clouds, and in its viscous and amphibious states such as marshes and wetlands as integral to how we imagine the future of India’s urban landscape?

Debjani Bhattacharyya is an Associate Professor of History and Urban Studies at Drexel University and a CASI Non-Resident Visiting Scholar.