"The Indian Novel as an Agent of History," Chandrahas Choudhury. The Hindu: Business Line. September 8, 2015

Six Acres and a Third: The Classic Nineteenth-Century Novel about Colonial India (University of California Press)

"This Is Not That Dawn: India and Pakistan in the time of Partition," Chandrahas Choudhury. The National. April 20, 2012

The Indian Novel as an Agent of History 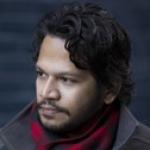 It is a universally-acknowledged truth that human beings experience their lives as embedded not just in time, but in history. To interpret history, they employ a variety of instruments: personal experience and cultural memory, political ideology and historiography, even (and sometimes especially) myths and stories. Among these instruments, a somewhat late-arriving one in India – only 150 years old – is the novel.

What is so noteworthy about the novel? It can be argued that as a form of story, let alone history, the novel does not enjoy great currency in India, for it is neither an indigenous form nor a mass one. Cinema has far greater popular appeal, and the stories and narrative conventions of epics like the Ramayana inform everyday life and moral reasoning much more than any novel (notwithstanding the apparent desire of nearly every Indian to write a novel, ideally a bestseller).

A preoccupation with Indian history ­is a thread running through the work of some of the greatest Indian novelists, across more than two dozen Indian languages and literary traditions. In the great diversity of narrative forms and interpretative cruxes generated by the Indian novel, there lies a wealth of wisdom about Indian history and, therefore, about how to live in the present time as an Indian and a South Asian, a modern of thetwenty-first century and a citizen in the often disorienting age of democracy.

Consider Fakir Mohan Senapati’s enormously sly, satirical, and light-footed novel Six Acres and a Third, written in Odia in 1902 and only translated into English in 2006. The plot of Senapati’s novel revolves around a village landowner’s plot to usurp the small landholding of some humble weavers. But this is also the Indian village in the high noon of colonialism, and the first readers of Senapati’s story would have delighted in the narrator’s many potshots against new and perplexing British institutions, administered by a new ruling class of English-educated Indians. “Ask a new babu his grandfather’s father’s name, and he will hem and haw,” the narrator chirps. “But the names of the ancestors of England’s Charles the Third will readily roll off his tongue.”

The story appears to be generating, then, an argument about history and political resistance. India must rid itself of its colonial masters because they have delegitimized many of the traditional knowledge systems and truths of Indian society, and in the process made the modern Indian self imitative and inauthentic. The argument persists in India today in debates about “westernization.”

But this raises a new question: was traditional Indian village society itself very wise, just, or balanced? As the story progresses, we see that anti-colonial sentiments have not blinded the narrator to the need to subject his own side to the scrutiny of satire. When we hear that “the priest was very highly regarded in the village, particularly by the women,” and that “the goddess frequently appeared to him in his dreams and talked to him about everything,” the complacency and mystifications of Brahmanical Hinduism are also laid bare, as is the credulity about those who would place their faith in such an order.

Senapati’s irony is effective not despite, but because of its double-sidedness. It leads to a point useful as much in our time as his own: criticism of a clearly marked-out “other” – to Indians in the early twentieth century, the British; to Hindu nationalists today, Muslims and Christians – often legitimizes a sweeping and complacent faith in one’s own worldview;the search for truth or meaning in history must remain a charade if not accompanied by the capacity for self-criticism. The novel’s implied argument is liberating not because it is comforting or inspiring, but precisely because it is disenchanted. Fiction itself shows us how human beings are fiction-making creatures, and must therefore take special care to scrutinize what they believe to be foundational truths.

A different kind of novelistic irony – cosmic rather than comic – radiates from This Is Not That Dawn, the recent English translation of Hindi novelist Yashpal’s thousand-page magnum opus from the 1950s about Partition, Jhootha Sach (literally, The False Truth). Tracking the lives and loves of a brother and sister across the worlds of Lahore and New Delhi in the years both before and after Partition, Yashpal’s novel generates dozens of alternative views of that cataclysm from viewpoints male and female, Hindu and Muslim, Indian and Pakistani (even as these new identities come into being and crystallize), prospective and retrospective.

Here is history on the grand scale – individual, national, human, all at the same time. Each character’s position or dilemma carries its own distinctive charge of hope, memory, conviction, doubt, faith, naïveté, prejudice, and fatalism; a vast spectacle of human beings swimming valiantly with and against the tides of history. If the narrator himself has something to say about the logic or validity of the breaking up of India, it remains parcelled out among the characters, and must be intuited by the reader.

But in fact, the feeling we take away from Yashpal’s novel is not that of an entirely tragic story. Of course, Partition destroyed a particular shared and historically stable, if unconceptualized, sense of what it meant to be Indian. But as we perceive from the quest of the protagonist, Jaidev Puri, to start his own newspaper based on the idea of secular reason, what it means to be Indian would, in a new democratic and secular republic, have entailed building upon a new foundation in any case. At certain junctures in history, tragedy and progress may be inseparably mingled.

As these examples show, the work of novels is not confined to mere representation of historical realities, although this is where they may start. Rather, a novel may be a creative intervention in history in its own right – an actual agent of history, passing on to the reader who passes through its narrative field both its diagnostic and visionary powers. Indeed, from Bibhutibhushan Bandyopadhyay to U. R. Ananthamurthy, Bankimchandra Chatterjee to Kiran Nagarkar, Qurratulain Hyder to Salma, Phanishwarnath Renu to Amitav Ghosh, novelists have generated some of the most layered and sophisticated visions of Indian history produced in the last two centuries. Yet as a group, they fall into no school or political camp. What unites them is their ability to illuminate the particular historical crux on which they focus, such as the tension in Ananthamurthy’s novels between the hierarchical imperatives of Hinduism and the egalitarian urges of democracy.

The novel form possesses certain advantages over other forms of discursive prose as a lens on history. There’s the persuasive power and ambiguity of a story, which may be read in many ways and asks for the partnership of the reader in the unpacking of its meanings. The freedom to rove in spaces of the past that we cannot access by means other than that of the imagination. The potential to think not in a straight line but dialectically in exchanges between characters, or switches in perspective between the narrator and the characters. All of these make the space of the novel a particularly fertile ground for historical thinking.

In fact, when they are themselves reinserted into the canvas of Indian history, the projects of the Indian novel and that of Indian democracy – both fairly new forms in Indian history – appear uncannily similar, and perhaps similarly unfinished. As Indian democracy has, over the past seven decades, sought to fashion a new social contract in a deeply hierarchical civilization, so the great Indian novel has attempted to not just find but to also form a new kind of reader/citizen, alive to both the iniquities and the redemptive potential of Indian history.

Chandrahas Choudhury is an Indian writer based in New Delhi, and the author of the novels Arzee the Dwarf (HarperCollins/NYRBLit) and Clouds (forthcoming). Some of the material in this essay was presented last year in a lecture at Yale University.