COVID-19 and the Importance of Improving Civil Registration in India 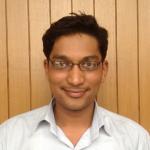 As we enforce social distancing measures, ramp up testing, and wash our hands in response to the COVID-19 pandemic, we find ourselves confronting many basic questions in demography and epidemiology. What is the likely trajectory of the virus? What is the death rate? Who is most vulnerable? Where are health resources needed? Answers to these questions depend on the reliability of health data systems. The most crucial health data systems are fairly simple: vital statistics that record every birth and death. More sophisticated systems track diseases, outbreaks, and chronic conditions. Like health care facilities everywhere, health data systems are also under pressure worldwide. These challenges are even greater in India because a substantial portion of deaths in India are never registered and vital statistics systems are compiled only after much delay.

Preliminary assessments of the impacts of COVID-19 have focused on analyzing the number of deaths from the disease, the number of confirmed cases, and their ratio. This ratio, called the case fatality rate (CFR), ranges between 0.58 percent (Israel) and 12.3 percent (Italy). A number of factors, such as population age, health system response, and underlying population health contribute to this variation. As is now well-recognized, the extent of testing influences CFR estimates as well. An additional factor is how and when causes of death are coded. Even in countries where all deaths are recorded and registered, death counts from COVID-19 are driven substantially by reporting from hospitals. Deaths at home or outside hospitals are ultimately making it to national registers in these countries, but with a delay and more uncertainty about the cause of death. Still, governments are responding to information from reporting from hospitals and vital statistics systems, recognizing their complementarity.

In countries like India, where death registration itself is incomplete and where most deaths are not assigned a cause of death by a trained medical professional, the CFR is very unreliable. Although it has improved, one in five deaths in India in 2017 was not registered in any kind of vital statistics database. Deaths where a cause of death was identified were an even smaller fraction of total deaths—less than one out of five. Additional problems are caused by delays in compiling results and missing information. The last year for which causes of death or death registration statistics were compiled was 2017. Even more worrisome are the findings of a recent study: as many as 38 percent of registered deaths in 2015 did not report age, and about 8 percent did not report sex. This incomplete death registration system is of no help to governments and other organizations in India responding to public health emergencies. 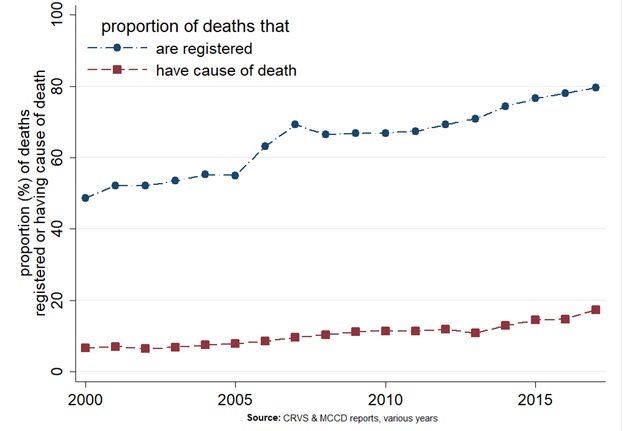 In the absence of a reliable vital registration system, the Integrated Disease Surveillance Program (IDSP) of the Government of India has been collecting data on cases and deaths from COVID-19 from testing laboratories and hospitals. The IDSP serves an essential function and its employees are working very hard, but its key limitation is that it has no way of tracking deaths outside hospitals.

The exclusive reliance on the IDSP harms India’s response to COVID-19. First, the IDSP system misses deaths due to COVID-19 among those who have not gotten tested. Second, a large number of people will die because COVID-19 worsened their underlying health conditions. Another substantial group will die because health care resources that could have saved them were not available. These deaths are also missed. Third, there is no systematic way to track the health implications of the government-imposed lockdown. Media reports collated by researchers Aman CB, Thejesh GN, and Kanika Sharma show that at least fifty people have died of exhaustion, hunger, and police brutality during the lockdown. The true death count is likely higher. Because death registration is poor in India, the government will have little data to respond to the impact of COVID-19 on large sections of the population who are malnourished and have poor lung function. Had these deaths been monitored, they could also have influenced the scale and geographic targeting of government relief measures as well as health care system responses.

Ultimately, relying on a network of laboratories and hospitals for disease surveillance is inadequate because few people in India have access to these laboratories and hospitals. This is where a timely and complete vital registration system has the biggest advantage. Since it is not disease-specific, it records all deaths. It can incorporate information on causes of death to the extent it is available. It is not complicated; unlike in a lab, recording deaths requires few specialized skills or equipment. Finally, it is universal. A complete and responsive civil registration system helps direct public attention, resources, and help where they are needed, not just where hospitals and labs are reporting cases.

Left: a woman waits for a death certificate in a Panchayat (village assembly) office. Right: a Panchayat office declares that it is also office of the sub-registrar for births and deaths.

How can death registration be improved? One way is to learn from India’s diversity. Death registration is complete or nearly complete in some Indian states. There is much here that states can learn from each other, especially on record keeping and encouraging registration. More immediately, government agencies could make sure the data that is painstakingly given and collected by such a large number of people is put to good use by compiling results rapidly. The latest life expectancy estimates for India are for 2013-17. The last available report on causes of death based on household interviews is from 2010-13. Even the most recent IDSP Weekly Outbreak Report is from the third week of January 2020. Now that the divisive National Population Register exercise has been delayed, spare and scarce state capacity at India’s Office of the Registrar General and Census Commissioner could be used for making sure death tracking in the civil registration system is up to date. Other ideas, such as a phone-based “death notification” system, integrating household interviews within the system for deaths outside hospitals, a large-scale sample survey with COVID-19 testing, and monitoring the effects of the lockdown on health and well-being through phone surveys are also worth considering. Finally, it is important to remember that surveillance approaches that shame, harass, or invade the privacy of those infected with COVID-19 harm our ability to fight the disease.

India has long been a pioneer in collecting reliable health data. In 1954, the National Sample Survey organized a survey on mortality, one of the first in the world. In the 1970s, India pioneered the Sample Registration System (SRS), a nationally representative panel on mortality. The Million Deaths Study, which builds on the SRS panel, is a pioneer in using interview methods to ascertain causes of deaths. The Annual Health Surveys, 2010-13, and the National Family Health Survey 2015-16 are among the largest sample surveys in the world. Even for the 1918 influenza pandemic, the Statistical Abstracts for British India are an important source of information on the global death toll.

Along with improving sanitation, hygiene, public health, health care delivery, and addressing social determinants of health, improving health data systems is the most urgent task in the domain of health for India. At this time of crisis—and afterwards—it is worth building on India’s legacy of innovative health data collection by making sure vital registration systems are complete and responsive.

Aashish Gupta is a doctoral student in demography and sociology at the University of Pennsylvania.