Punyabhumi and Madatbhumi: Mapping the Conceptual Cartography of Indian Nationalisms

in partnership with South Asia Center and the Penn History Department 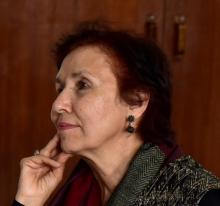 About the Lecture:
Professor Mayaram will draw upon her forthcoming book, The Secret Life of Another Indian Nationalism: Transitions from the Pax Britannica to the Pax Americana (Cambridge University Press, 2021) to demonstrate how Punyabhumi has defined for a over a century the contours of exclusivist Indian nationalism seeking to exclude persons who adhere to the Abrahamic and some other faiths that have their sacred sites outside the subcontinent. As Jews, Christians, and Muslims, they are regarded as “strangers” legislating thereby an un-belonging to the nation. It is then a short step to the Constitution Amendment Act (CAA) legislation that disenfranchises Muslims as citizens of India. Needless to say, the concept of Punyabhumi also has an Inclusivist dimension leveling all castes as Hindus who belong to the Indian nation, even offering the “right to return” to Hindus in the three Muslim majority nations of South Asia. In contrast, Madatbhumi, as a civilizational concept, implicitly views both Abrahamic and non-Abrahamic saints, spirits, and heroes as belonging to the subcontinent. Underlying it is a metaphysics of care, a conception of shared sovereignty between political and cosmic authority in which the divine crafts a loving, caring universe, enabling life and the alleviation of social suffering.

About the Author:
Shail Mayaram is an Honorary Fellow at the Centre for the Study of Developing Societies, Delhi, where she has formerly been a Professor, and Co-Director of the International Center for Advanced Study (ICAS-MP), 2019-20. Her prior publications include Against History, Against State: Counterperspectives from the Margins (2003); Resisting Regimes: Myth, Memory and the Shaping of a Muslim Identity (2016, 2nd edition); Israel as the Gift of the Arabs: Letters from Tel Aviv (2015); coauthored, Creating a Nationality: The Ramjanmabhumi Movement and the Fear of Self (1995). Edited books include The Other Global City (2009), Philosophy as Saṃvāda and Svarāj: Dialogical Meditations on Daya Krishna and Ramchandra Gandhi (2013), Modernity, its Pathologies and Reenchantments (2020) and Subaltern Studies: Muslims, Dalits and the Fabrications of History (coedited, 2007). She has worked on subaltern pasts and moral imaginations of peasant, pastoral, and forest-based communities, cosmopolitanism and the city, and is interested in Indic and Islamic knowledge traditions. Her current research is on Non/Political Islam and Heresy, Martyrdom, and the Sacred City.