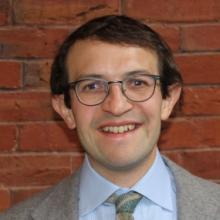 About the Speaker:
Scott Moore is a political scientist whose work focuses on water politics and policy, especially in China and South Asia. Scott is currently a Senior Fellow at the Penn Water Center as well as Director of China Programs in the Office of the Provost and Associate Professor of Practice in the Center for the Study of Contemporary China at the University of Pennsylvania. Until 2018, Scott was a Young Professional and Water Resources Management Specialist with the World Bank Water Global Practice, where he co-led a study of China’s water sector with the Development Research Center of the State Council and was a co-author of two flagship reports, High and Dry: Climate Change, Water, and the Economy, and Uncharted Waters: the New Economics of Water Scarcity and Variability. Previously, Scott served as Environment, Science, Technology, and Health Officer for China at the U.S. Department of State, where he worked extensively on the Paris Agreement on climate change, and prior to that was Giorgio Ruffolo Post-Doctoral Research Fellow at Harvard University. He has published widely on the full range of global water issues in leading publications including Nature, Foreign Affairs, and The New York Times. He is also the author of Subnational Hydropolitics: Conflict, Cooperation, and Institution-Building in Shared River Basins, published in 2018 by Oxford University Press. Scott holds a doctorate in Politics and a master’s degree in Environmental Change and Management from Oxford University, where he was a Rhodes Scholar, and a bachelor’s degree from Princeton.

About the Lecture:
From the San Francisco Bay area to Sao Paulo to Riyadh, water shortages increasingly cloud economic forecasts. But nowhere is the risk greater than in South Asia, where India, the largest economy and most important regional power, faces crippling shortages and a lack of consensus on what to do about them. In turn, water problems threaten to drag down India’s economic growth and slow its rise to regional power. In this talk, Scott Moore will explore some of the causes of India’s many inter-state water disputes, and what they say about the state of India’s federal system. He'll also discuss some promising ways to convert India’s pervasive sub-national water wars into cooperation.