Quo Vadis the Quad? A Deterrence Alliance or Self-Deterred Alignment in Indo-Pacific? 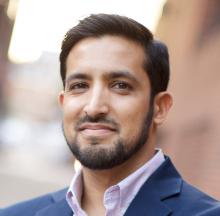 About the Speaker:
Sameer Lalwani is a Senior Fellow for Asia Strategy and Director of the South Asia Program at the Stimson Center where he researches nuclear deterrence, interstate competition, crisis behavior, and counter/insurgency. He is also an Adjunct Professor at George Washington University’s Elliott School of International Affairs, a Contributing Editor to War on the Rocks, and was previously a Stanton Nuclear Security Postdoctoral Fellow at the RAND Corporation. Lalwani is the co-editor of Investigating Crises: South Asia’s Lessons, Evolving Dynamics, and Trajectories (Stimson, 2018). His work has been published in Security Studies, the Journal of Strategic Studies, Small Wars & Insurgencies, Foreign Affairs, Foreign Policy, CTC Sentinel, and the New York Times,as well as volumes by RAND, New America, Cato, Routledge, Sage, and Oxford University Press. Lalwani completed his Ph.D. from MIT’s Department of Political Science, where he was an affiliate of its Security Studies Program, and a B.A. from the University of California, Berkeley.

About the Lecture:
The reemergence in 2017 of the Quadrilateral Security Dialogue, or “Quad” between the US, India, Japan, and Australia again raised questions regarding the purpose of this arrangement—if this purpose is shared by all four countries and whether the alignment is likely to hold any promise for the US as a multilateral security partnership oriented toward deterring China. In particular, India’s lack of enthusiasm for the Quad or any coordinated deterrence relationship above other regional dialogues has come under scrutiny since the Modi-Xi Wuhan summit in 2018. Despite optimism regarding the “natural” convergence of shared values and interests of the four Quad countries in the Indo-Pacific, India’s lukewarm approach to the Quad highlights significant differences in interests and capabilities that persist between the United States and India. Using a typology of alignments as a baseline against which to assess this divergence, Dr. Lalwani argues that the U.S. view of the Quad differs fundamentally from Indian preferences, and identifies several structural reasons for India’s divergence: distinct capabilities, geography, system position, strategic preferences, and the possession of nuclear weapons. These factors contribute to threat perceptions that differ from the US and its Japanese and Australian allies, leading to disparate priorities, magnifying India’s lesser capabilities, and likely limiting India’s contribution to and integration with a deepening multilateral military alignment in the Indo-Pacific over the long-term.