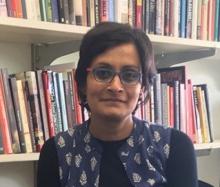 About the Seminar:
This seminar focuses on the new spatial forms of urbanization along India's economic corridors. Spanning multiple cities and croplands, these corridors connect metropolises via new infrastructure networks in an effort to make certain strategic regions attractive destinations for private investment. As policy makers search for decentralized and market-oriented means for the transfer of land from agrarian constituencies to infrastructural promoters and urban developers, the reallocation of property control is erupting into volatile land-based social conflicts. Balakrishnan will focus on the almost neat territorial overlap between the most economically active corridor regions and former Green Revolution regions. This overlap prompts the question: what new theories of urbanization emerge when older histories of agrarian capitalism collide, collude, and recombine with the new economic corridors? The talk is based on the research for her book, Shareholder Cities: Land Transformations Along Urban Corridors in India (UPenn Press, 2019), and will mainly focus on the agrarian-urban land transformations along India's first economic corridor, the Mumbai-Pune Expressway. The talk will make a wider argument on India's uneven spatial development, which is most visible today in the lockdown-induced migrant crisis.

About the Speaker:
Sai Balakrishnan is an Assistant Professor of City and Regional Planning at UC Berkeley, in a joint appointment with DCRP and GMS (Global Metropolitan Studies). Her research and teaching broadly pivot around global urban inequalities, with a particular focus on urbanization and planning institutions in the global south, and on the spatial politics of land-use and property. She has worked as an urban planner in the United States, India, and the United Arab Emirates, and as a consultant to the UN-HABITAT, Nairobi. Her work has been published in the International Journal of Urban and Regional Research, Urban Studies, Pacific Affairs, Economic and Political Weekly, and in edited book chapters. Her research has been quoted in media outlets, including The Guardian and Open. Balakrishnan holds a Master’s Degree in City Planning from MIT, a Master’s Degree in Urban Design from the University of Michigan, and a Ph.D. in Urban Planning from Harvard University. Her doctoral dissertation was awarded the 2014 Association of Collegiate Schools of Planning (ACSP) Gill Chin Lim Award for Best Dissertation on International Planning.