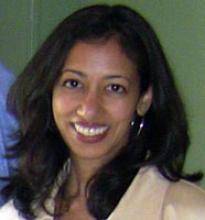 About the Speaker:
Rina Agarwala is Associate Professor of Sociology at Johns Hopkins University. Agarwala publishes and lectures on international development, labor, migration, gender, social movements, and Indian politics. She is the author of the award-winning book, Informal Labor, Formal Politics and Dignified Discontent in India (Cambridge, 2013) and the co-editor of Whatever Happened to Class? Reflections from South Asia (Routledge, 2008, 2nd edition 2015). She has published articles on informal labor, transnational movements, migration, legal justice, and gender in International Migration Review, Theory and Society, Social Forces, Journal of Industrial Relations, Political Science and Politics, Research in the Sociology of Work, Annals of the American Academy of Political and Social Science, Critical Asian Studies, and Indian Journal of Labour Economics. Currently, she is working on a book manuscript on migration and development, and a cross-country comparative project on informal workers’ movements in seven countries. She has also worked on international development issues at the United Nations Development Program (UNDP) in Beijing, the Self-Employed Women’s Association (SEWA) in Gujarat, and Women’s World Banking (WWB) in New York. She holds a BA in Economics and Government from Cornell University, an MPP in Political and Economic Development from the Harvard Kennedy School of Government, and a Ph.D. in sociology from Princeton University.

About the Seminar:
How are sending country governments managing the out-migration or emigration of their citizens and how are migrants reacting to and reshaping sending state actions? This seminar employs a comparative-historical examination to answer these questions using a class lens. Contemporary global migration is not only marked by its sheer size and racial diversity, it is unprecedented in its class variation. These class variations have catalyzed countless and well-publicized challenges for state leaders in receiving countries. In sending countries, however, the class politics of out-migration is virtually unknown. To address these questions, this seminar compares the Indian state’s relations with its low-skilled emigrants to the Middle East and its high-skilled emigrants to the U.S. from the 1920s to the present. Contrary to assertions that sending states’ emigration policies are merely reacting to externally-imposed “neoliberal” development models of economic growth, Agarwala argues that global emigration has long served as a proactive vector through which sending states re-shape and cement new domestic-level economic ideologies. Sending state emigration policies, therefore, do not just reflect pre-determined development goals, they shape those development goals. In India, emigration has been used to empower some classes, while disempowering others before and after the rise of neoliberalism, thereby exposing “class” as a much bigger factor than “neoliberalism” in explaining the variations in India’s migration policies (across peoples and across time). The terms of the class-based inequities underlying India’s development ideologies have changed over time, although the inequities themselves have remained consistent. These findings not only provide a more complete picture of global migration efforts, they also expose the conditions under which migrants’ resistance efforts succeed and fail.