in partnership with the South Asia Center and Dept. of History 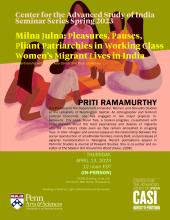 About the Seminar:
In five interviews over the course of three years, Meena, a Jharkhandi domestic service worker in a middle-class home in HiTech Hyderabad, shared stories of milna julna to map her life. Meena used milna julna, a polysemic term, to convey meeting-dating, conviviality, social, and sexual intercourse. Milna julna, as an analytic, provides a peek into the interstitial spaces where urban migrants—Meena and five others—craft friendships, joys, and loves. Their intimate interludes, against all odds, reveal patriarchies in play, sometimes paused, at others pliant, and predictably, piggish. Nevertheless, Meena dreams of a sparkling (chamatkar) tomorrow. 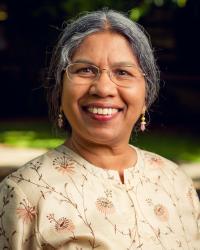 Priti Ramamurthy is a Professor in the Department of Gender, Women, and Sexuality Studies at the University of Washington, Seattle. An ethnographer and feminist political economist, she has engaged in two major projects: Inbetweens: City Lives, Rural Ties, a book-in-progress, co-authored with Vinay Gidwani, about the lived experiences and desires of migrants who toil in India's cities even as they remain enmeshed in on-going lives in their villages. And several essays on the relationship between the social reproduction of smallholder families, mainly Dalit, and processes of agrarian transformation in Telangana. Recent publications appear in Feminist Studies and Journal of Peasant Studies. She is the co-author and co-editor of The Modern Girl Around the World (Duke University Press, 2008).