Reclaiming the Grassland for the Cheetah: Nature, Knowledge, and Power in Twentieth Century India 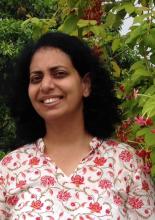 About the Speaker:
Dr. Ghazala Shahabuddin is a Senior Fellow at the Centre for Ecology, Development and Research (CEDAR), Delhi, where she is researching the ecological and institutional aspects of decentralized forest management, urban ecology, conservation-induced displacement and wildlife policy in India.

Dr. Shahabuddin earned her Ph.D. in conservation biology from Duke University (1998), where she studied the ecological consequences of tropical forest fragmentation, based in the Guri Islands of Venezuela.  Subsequently, she worked with a number of research organizations and non-profits in India including the Council for Social Development and Wildlife Conservation Society-India Programme. She has also worked as a consultant with the World Bank (Washington DC), United Nations Development Programme (Delhi), and CARE-Nepal (Kathmandu). Between 2009-14, Dr. Shahabuddin worked as an Associate Professor at the School of Human Ecology at Ambedkar University, Delhi, where she helped establish MA and Ph.D. programs in Environment and Development, and taught ecology, environmental policy and politics, and statistics.

Dr. Shahabuddin has published extensively in scientific journals in the areas of conservation biology, ornithology, and wildlife policy. Her book, Conservation at the Crossroads: Science, Society and the Future of India’s Wildlife (Permanent Black, India, 2010), examines the science and politics of nature conservation in India. She has co-edited two other books: Nature Without Borders (Oxford University Press, 2014) and Making Conservation Work: Securing Biodiversity in this New Century (Permanent Black, 2007).

About the Lecture:
The Asiatic cheetah reintroduction plan sparked lively and often rancorous arguments on the pros and cons of attempting to revive the population of a large carnivore that had been missing from the Indian landscape for over half a century. The ecological merit of trying to revive cheetah populations in India was debated, not just between government and civil society but also amongst scientists themselves. Local activists feared it might deepen existing park-people hostilities in India. Some saw it as an assertion of regional identity on the part of influential biologists, inspired by the concept of “rewilding”— first conceptualized for North American landscapes, which aims at recreating Pleistocene-like ecology. This lecture attempts to trace the history of thought and imagination on cheetah reintroduction, and explores the uneasy alliances amongst the constituencies of science, conservation, knowledge, and power through the medium of the cheetah.