Will the Indian Elephant Dance Again? 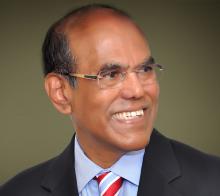 About the Speaker:
Dr. Duvvuri Subbarao served as Governor of the Reserve Bank of India for five years (2008-13). Prior to that, Dr. Subbarao was Finance Secretary to the Government of India (2007-08) and Secretary to the Prime Minister’s Economic Advisory Council (2005-07).

Dr. Subbarao joined the Indian Administrative Service (IAS) in 1972, topping the highly competitive civil services entry examination in that year. As a career civil servant, he worked in various positions in the state government of Andhra Pradesh and in the federal government of India. He was a Lead Economist in the World Bank (1999 - 2004).

Dr. Subbarao began as Governor of the Reserve Bank of India just a week before the global financial crisis erupted in full in mid-September 2008, and he led the effort to mitigate the impact of the crisis on the Indian economy and to institute economic and financial sector reforms reflecting the lessons of the crisis.

In his capacity first as Finance Secretary and later as Governor, RBI, Dr. Subbarao was alternate Governor for India on the Governing Boards of the World Bank and the IMF. He participated actively in the G 20 meetings, the meetings of the International Monetary and Financial Committee (of the IMF), bi-monthly meetings of Governors at the Bank for International Settlements (BIS) in Basel, the Asian Consultative Committee of central bank Governors, and a host of other international committees and conferences where his views were respected for the emerging market perspective he brought to bear on the discussions.

About the Lecture:
India grew at a rapid clip during Prime Minister Modi’s first term (2014-19), occasionally gaining bragging rights as the fastest growing large economy in the world. But even as the Modi government was settling into its second term after a resounding re-election in May this year, growth slumped to a six year low of 5 percent in the second quarter of 2019, raising the all too familiar doubts about whether India can ever deliver on its promise. What caused India’s rapid and occasionally spectacular growth performance in the last two decades, and what explains the current slow down? What will it take for India to succeed and will Modi invest his enormous political capital to get that done? Can the Indian elephant replace the Chinese dragon as the world’s next growth engine?