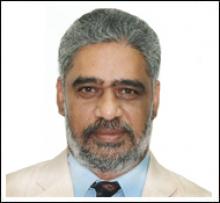 About the Speaker:
Dr. C. Raja Mohan is the Head of Strategic Studies and a Distinguished Fellow at Observer Research Foundation, New Delhi. His area of expertise is in India’s Foreign and Defence policies, Asian Security, Arms Control & Disarmament, and the Impact of Rising Powers on the Global Order. Dr. Mohan has a Master’s degree in Nuclear Physics and a Ph.D. in International Relations. He is currently a member of India’s National Security Advisory Board, having served there earlier from 1998-2000 and 2004-06. He is also a Visiting Research Professor at the Institute of South Asian Studies, Singapore, and a Non-Resident Senior Associate at the Carnegie Endowment for International Peace, Washington DC. Dr. Mohan served as the Diplomatic Editor and the Washington Correspondent of The Hindu and the Strategic Affairs Editor of The Indian Express, for whom he is now a foreign affairs columnist. His books include, Crossing the Rubicon: The Shaping of India’s New Foreign Policy (2004) and Impossible Allies: Nuclear India, United States and the Global Order (2006). His new book, Samudra Manthan: Sino-Indian Rivalry in the Indo-Pacific, was published in 2012. Dr. Mohan’s visit to Penn is made possible through the University of Pennsylvania Office of the Vice Provost for Global Initiatives and its Distinguished International Scholars Program.

About the Lecture:
As India’s military capabilities grow, its role as a net provider of regional and international security has come into American view. Dr. Mohan will assess the current trends in India’s military engagement with the great powers, regional actors, and smaller neighbors, contrasting them to the legacy of non-alignment and military isolationism, and examining the prospects for India accepting the burden of protecting weaker states, promoting regional order, and securing global commons.