Why Do Poor Voters Choose a Pro-Rich Party in India?

in partnership with the South Asia Center & Dept. of South Asian Studies 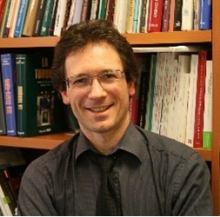 About the Seminar:
The tax policy of NDA II is revealing of its desire to spare some of the better off tax payers, whereas its welfare programs are not as redistribution-oriented as those of the UPA. Still, in 2019, a large number of poor voters have opted for the BJP. While this state of things can be explained by many factors (including the impact of social work and identity politics), in this seminar, Prof. Jaffrelot will focus on the role of caste to suggest that the BJP has attracted the jatis of SCs and OBCs, which have not benefited very much from reservations and which happen to be the poorest.

About the Author:
Christophe Jaffrelot is a political scientist specialising in South Asia, particularly India and Pakistan. He is a Professor of South Asian politics and history the Centre d'études et de recherches internationales (CERI) at Sciences Po (Paris), a Professor of Indian Politics and Sociology at the King's India Institute (London), and a Research Director at the Centre national de la recherche scientifique (CNRS). Prof. Jaffrelot’s publications on India cover aspects of Indian nationalism and democracy, Hindu nationalism, caste mobilization in politics, and ethnic conflicts. Most recently, he is the author of Modi's India: Hindu Nationalism and the Rise of Ethnic Democracy (2021). His prior publications include Saffron Modernity in India: Narendra Modi and his Experiment with Gujarat (2015), Religion, Caste, and Politics in India (2011), and many other co-authored and edited volumes. He is the Senior Editor of the Sciences Po book series, Comparative Politics and International Relations published by C. Hurst & Co. He has been the Editor-in-Chief of Critique Internationale and serves on the editorial boards of Nations and Nationalism and International Political Sociology. He is also on the editorial board of The Online Encyclopaedia of Mass Violence. Prof. Jaffrelot's current research deals with the sociology of the Indian political personnel (including the Members of Parliament and the Members of the Legislative Assemblies), the Dargahs of Ajmer, India-Pakistan relations, the political history of Gujarat (from the point of view of the relations between politicians and businessmen in particular), and populist politics with special reference to the “Modi phenomenon.”