Caste and Religion in the Era of Economic Growth 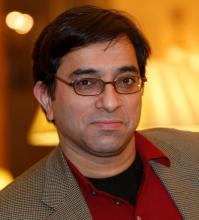 About the Speaker:
Ashutosh Varshney is Sol Goldman Charitable Trust Professor of International Studies and Political Science, Brown University, where he also directs the India Initiative.  Previously, he taught at Harvard and the University of Michigan, Ann Arbor. His books include Battles Half Won: India’s Improbable Democracy; Ethnic Conflict and Civic Life: Hindus and Muslims in India; Democracy, Development and the Countryside: Urban-Rural Struggles in India; and India in the Era of Economic Reforms. His honors include the Guggenheim and Carnegie fellowships and the Gregory Luebbert Prize. He is a contributing editor for The Indian Express, and his guest columns have appeared in many other newspapers, including Financial Times. He is editor-in-chief of a new book series on contemporary South Asia, to be published by Oxford University Press, New York.

About the Lecture:
Over much of the twentieth century, caste and religious cleavages formed the master narratives of mass politics in India, repeatedly unleashing movements, political campaigns and conflicts. Of late, India has witnessed a prolonged period of high economic growth. How has this growth influenced the way caste and religion play themselves out in society and politics, and are these trends likely to continue?

Caste hierarchy was historically a system of social domination, marked by endogamy, pollution, and purity. In urban India, this hierarchy is on the verge of breaking down and caste has acquired a new form. It has gone through “ethnification” and become an interest group, one of whose primary aims is to extract resources from the state. In rural India, this kind of breakdown is less complete and more varied, having progressed farther in the South and less in the North. Essentially, caste has not disappeared, but its meaning is changing. We are identifying a process, not proposing a binary.

The impact of growth on religion is more complex. Religiosity shows no signs of abatement in modern India, but two things have happened. The incidence of communal riots has declined, though religious prejudice continues to be prevalent. Whether riots will return to India in a big way is likely to be a function of three variables: (a) income levels, (b) the nature of linkages between Hindus and Muslims, and (c) the instrumental use of violence in building winning political coalitions.