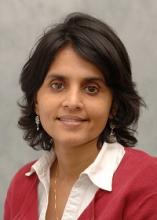 About the Speaker:
Anandi Mani is an Associate Professor in the Department of Economics at the University of Warwick. She also functions as Capacity Building Fellow at the Centre for Competitive Advantage in the Global Economy (CAGE) in the UK. Her research interests lie in the area of development economics, with an emphasis on issues related to the psychology of poverty, gender, and political economy. Her ongoing projects on poverty focus on its impact on cognitive abilities, decision-making, and aspirations. She has also been working on political economy issues related to public good outcomes in India, including the division of authority between politicians and bureaucrats and the impact of female political representation. Her field work in India has been carried out in several states including Andhra Pradesh, Orissa, Tamil Nadu, Uttar Pradesh, and West Bengal. She is currently a consultant to the World Bank on projects related to politics, gender, and development. Dr. Mani has a Ph.D. in Economics from Boston University.

About the Lecture:
Poverty implies financial worries from having to juggle with low, uncertain incomes and larger expenses. The hypothesis proposed is that being pre-occupied with pressing financial concerns reduces mental resources available to focus on important but non-urgent matters. Thus, simple inattention – rather than some peculiar preferences or values – of the poor may result in self-defeating outcomes. Dr. Mani and co-authors recently found that poverty lowers a person’s IQ by about 13 points (equivalent to the loss from a full night’s sleep). The lecture will describe these basic findings, and also focus on recent work that traces various implications of this basic finding. Based on ongoing work in the drought-prone region of Ceara in Northeast Brazil, she will discuss why and how specific decisions by farmers are especially affected by this lower IQ. The project uses high-frequency telephone surveys, coupled with rain forecast interventions, to examine how farmers’ anxiety about drought concerns affects cognitive function as well as farming-related decisions. Based on a separate project involving unconditional cash transfers to poor farmers in Kenya, the lecture will address another question arising from the impact of poverty on mental bandwidth: are cash transfers applied more effectively if they are transferred at times of relative plenty, rather than at times of extreme poverty?