To Trade or Not to Trade: Decoding India's Trade Policy and Its Implications 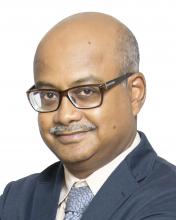 About the Speaker:
Amitendu Palit is a Senior Research Fellow and Research Lead (Trade and Economic Policy) at the Institute of South Asian Studies (ISAS) at the National University of Singapore. Previously, he worked in India’s Ministry of Finance and handled India’s external sector, industrial and infrastructure policies. He also worked in the Indian Council for Research on International Economic Relations (ICRIER) and was on Advisory Committees of India’s Planning Commission and the International Labour Organisation (ILO). His books include The Trans-Pacific Partnership, China and India: Economic and Political Implications (Routledge, UK; 2014), China India Economics: Challenges, Competition and Collaboration (Routledge, UK; 2011), Special Economic Zones in India: Myths and Realities (Anthem, UK; 2008, co-authored) and South Asia: beyond the Global Financial Crisis (edited; World Scientific, 2011). He is a consultant for the Commonwealth Secretariat, International Institute of Sustainable Development (IISD) and the Ministry of Commerce, India. A columnist for India’s Financial Express, he writes for the China Daily and appears regularly on the BBC, Bloomberg News, Channel News Asia, CNBC, and Reuters.

About the Lecture:
Despite participating actively in institutionalization of the multilateral trade framework of the WTO and engaging in multiple regional and bilateral FTA negotiations, India’s trade policy remains ambiguous. Over the years, India has acquired the reputation of being a difficult and obstructive trade negotiator, unwilling to grant preferential market access to partners by lowering tariffs in agriculture, dairy, automobiles, and many other sectors, while insisting on easy mobility for its skilled professionals in partner country labor markets. The posturing leaves little room for flexibility in trade negotiations inhibiting movement in India’s ongoing trade talks with Europe and Asia-Pacific countries. India’s insistence on trade safeguards for agricultural imports and emphasis on linking the multilateral trade facilitation agenda with national food security concerns has led to the US and several other developed countries holding it responsible for stunted progress in global trade liberalization. Indeed, notwithstanding rapidly increasing strategic proximity between India and the US and their greater collaboration in global and regional affairs, they remain distant and sparring partners in nearly all trade matters. The dichotomy in the quality and pace of India’s diplomatic and trade engagement with the US and other major global and regional actors has become particularly noticeable during the two years of the Modi government. The talk will attempt to identify the reasons behind India’s “defensive” trade posture, the contrast in proactivity between India’s contemporary foreign and trade policies, and the impact of the divergence between the latter policies on India’s international relations.